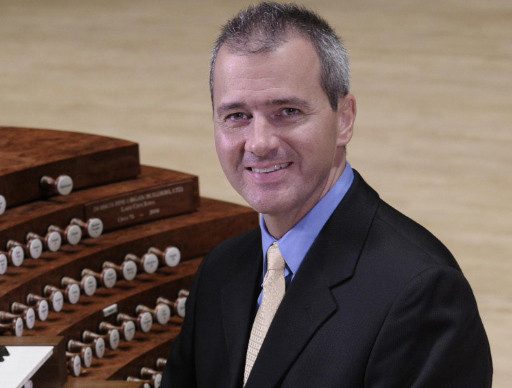 20 Years as UC’s Own Concert Organist

Twenty years ago Professor of Music John French and the late Trustee William F. Heefner ’42 wanted to promote the new organ at Ursinus with a CD of recorded music. A well-known concert organist recommended young Curtis graduate Alan Morrison. The rest, as they say, is musical history.
February 10, 2015

Morrison marks 20 years as College Organist with a free, 4 p.m., Feb. 15 organ concert in Bomberger Auditorium. The program will include pieces by J.S. Bach, S.S. Wesley, Marcel Dupré, Sergei Rachmaninoff, Jon Spong and John Weaver. The Weaver piece brings the history full circle, as Weaver himself, then head of the Curtis Institute Organ Department, played at the Heefner organ’s dedication in 1986.

Morrison, a graduate of Curtis and Juilliard, has since been recognized as one of America’s premier concert organists, performing in prestigious concert organ venues across the U.S. and internationally. He is the head of the Curtis organ department, an associate professor of organ at Westminster Choir College of Rider University, and head of the organ department at Westminster Choir College. He frequently conducts master classes sponsored by the American Guild of Organists.

Morrison remembers the first performance, for the organ CD. “I was fresh out of school, having just received my Master of Music from Curtis. About a year later, talks began about hiring an official organist to perform, plan a series featuring international performers, accompany choral activities at the College…. I guess they liked the CD so they asked me.”

He and French have collaborated since. Says Morrison of French: “His solid leadership, friendship and skill have provided years of happy memories and hopefully many more to come. It has been a joy to play for the student choirs over the years and also the community choir which joins forces with the students in regular performances of choral masterworks. Dr. French has built a strong community through music…  When I walk into a rehearsal or performance with all of them it’s like walking in the front door of home.”

The 62-rank organ built by Austin Organs of Hartford, Conn., was a gift of Mrs. Lydia V. Heefner of Bedminster Township, in memory of her husband, Russell. They were the parents of William Heefner ’42, an attorney, former Chair of the Board of Trustees  and onetime student organist at Ursinus, on an older organ. The new organ was dedicated on Nov. 19, 1986, the same day French was installed as the Heefner Chair of Music, a title he holds today.

Morrison enjoys the “colorful” Heefner Organ which “can play any and all repertoire. Some instruments tend to work well for baroque literature or French romantic literature but the Heefner Memorial Organ plays it all due to its vast tonal resources.“ He calls Bomberger Hall a “very intimate space to connect with an audience and that helps to communicate more easily to the listeners.”

While Morrison is considering a community event that might include parents and children, “introducing them to the king of instruments,” Morrison said is grateful to the regular audience members.

“If people only knew the magnitude of the instrument behind the doors of Bomberger and the  fabulously beautiful and entertaining music that can be heard on it, we can begin to attract a new audience for the future.”

The Heefner Organ, he says, “is the orchestra of Ursinus.”