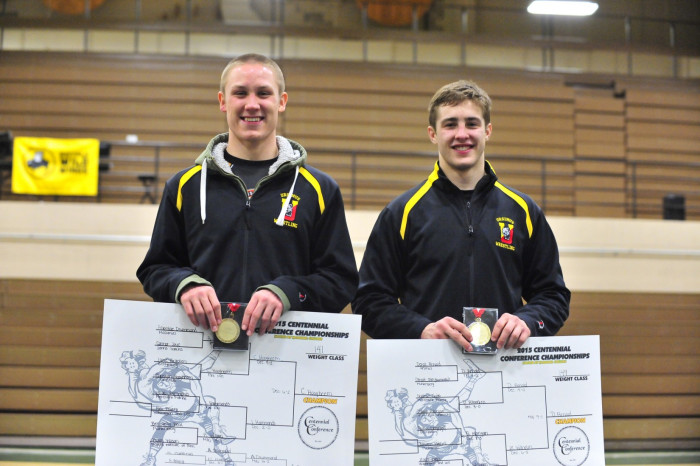 An Ursinus sophomore is Centennial Wrestler of the Year as Ursinus prepares to compete at the Centennial Conference Regionals in Roanoke, Va. next week. He joins six others on the 2015 All-Centennial team.
February 18, 2015

Ursinus College sophomore 149 pounder Derek Arnold (Centreville, Va./Westfield) was named as the 2015 Centennial Conference Wrestler of the Year on Wednesday.

Arnold, who became the first Ursinus to win Wrestler of the Year honors since Eddie Murray achieved the honor in 2005, won the 141 pound weight class at Centennials. Also, Keven Hoogheem was selected as the Centennial Conference Wrestling Scholar Athlete of the Year, with the highest GPA of any member of the junior or senior class on the All-Conference team.

Ursinus finished second at the Centennial Conference Championships, and will compete at the NCAA Regionals next week in Roanoke, Va.

Arnold joined six other Ursinus wrestlers on the 2015 All-Centennial team. The team is made up of students who finished first and/or second at the championship tournament held last weekend at McDaniel.

Arnold, who was also named to the All-Sportsmanship team, currently stands at an impressive 28-1 overall with seven pins, nine major decisions and a technical fall to his belt. He is a repeat first-team All-Centennial selection.

Christian Hoogheem, who won the 141 pound bracket, is 19-9 heading into regionals with seven falls and three major decisions.

Donaldson, runner up at 125, is 6-2 this season with two major decisions and two pins. He is a repeat honorable mention selection.

Keven Hoogheem, who also was named All-Centennial All-Academic, was runner up at 133 and had a 20-8 record with two pins, three major decisio0ns and two technical falls.

Jasinski, an All-American last season, is 20-2 this season with six pins and three major decisions. He was a runner up at 157 pounds, and an All-Centennial All-Academic selection. He was a two-time first-team selection in 2013 and 2014.

Manganaro, an honorable mention selection last season, is 17-2 this season with seven pins. He was a runner up at 184 pounds.

Finally, Peleg, who was an honorable mention selection last season, is 2-1 this season, missing most of the year due to injury. He is an All-Centennial All-Academic selection as well.