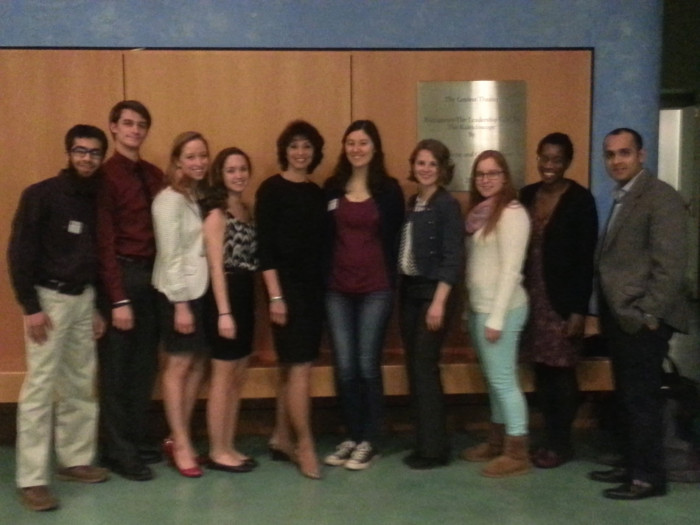 Students, faculty and staff, and members of the community gathered to listen to a powerful talk on the effects of alcohol on fetal development, from a leader in this field of research, Dr. Kathleen Sulik, PhD.
HomepageParlee Center for Science and the Common GoodDr. Sulik Speaks on Fetal Alcohol Spectrum Disorder

Students, faculty and staff, and members of the community gathered to listen to a powerful talk on the effects of alcohol on fetal development, from a leader in this field of research, Dr. Kathleen Sulik, PhD.
March 25, 2015

Dr. Kathleen K. Sulik, PhD, gave a moving lecture on Monday, March 23rd to complete the Center for Science and the Common Good’s 2014-2015 lecture series. Dr. Sulik is a professor of cell biology and physiology and a member of the Bowles Center for Alcohol Studies at the University of North Carolina, Chapel Hill. Her talk focused on craniofacial birth defects that are caused by maternal alcohol use. She presented her results alongside an advocacy to spread awareness about the dangers of maternal alcohol use and to spur a conversation about prevention efforts.

Her talk began with beautiful, rarely seen images of human embryos at various stages, taken by Dr. Sulik using high resolution imaging. This allowed audience members to get a brief understanding of normal development before she moved on to alcohol-induced structural brain and face abnormalities. Her studies have shown, using a mouse model, that maternal alcohol use reduces the philtrum area of the face and, when used extensively by the mother, reduces and can totally eliminate the forebrain. This has to do with the way that the face and forebrain develop: the head of the embryo folds in on itself in the middle, creating the forebrain from cells that were initially located in between the eyes and nostrils and bringing those structures closer together in the process. When maternal alcohol exposure is especially severe, the lack of forebrain can be so extensive that the eyes and nostrils are brought so close together that they appear to be one. Dr. Sulik has actually used this knowledge to develop a science-based high school curriculum in which students can measure the distance between the eyes of fish who have been exposed to varying degrees of alcohol to determine which fish were exposed to the highest doses. This, combined with a humorous yet informative video about the dangers of drinking while pregnant, encompasses the “An Ounce of Prevention” program that Dr. Sulik has developed. This program works to prevent Fetal Alcohol Spectrum Disorder (FASD) by raising awareness about it in youth populations.

An interesting yet frightening point brought up in her talk was that exposure of a fetus to alcohol during the first trimester causes major malformations and functional changes. For example, Day 7 alcohol exposure in mice, which corresponds to Week 3 in human fetal development, causes full blown Fetal Alcohol Syndrome (FAS). At Week 3 of pregnancy, most women are unaware that they are pregnant, especially if a pregnancy is unplanned. This, in addition to an awareness of public lack of knowledge about what alcohol actually does to a fetus, has urged Dr. Sulik to become an advocate for FASD prevention. Through the “An Ounce of Prevention” curriculum and other efforts, she works to educate the public about FASD and urges all women to refrain from drinking if there is a chance they could get pregnant.