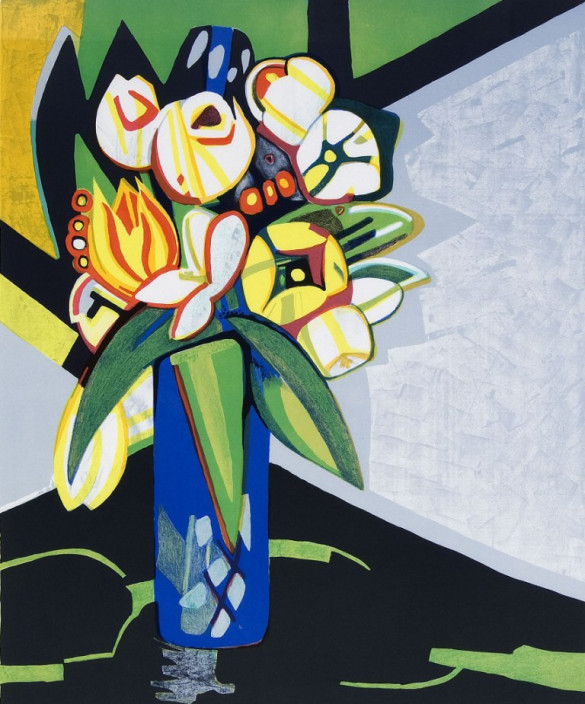 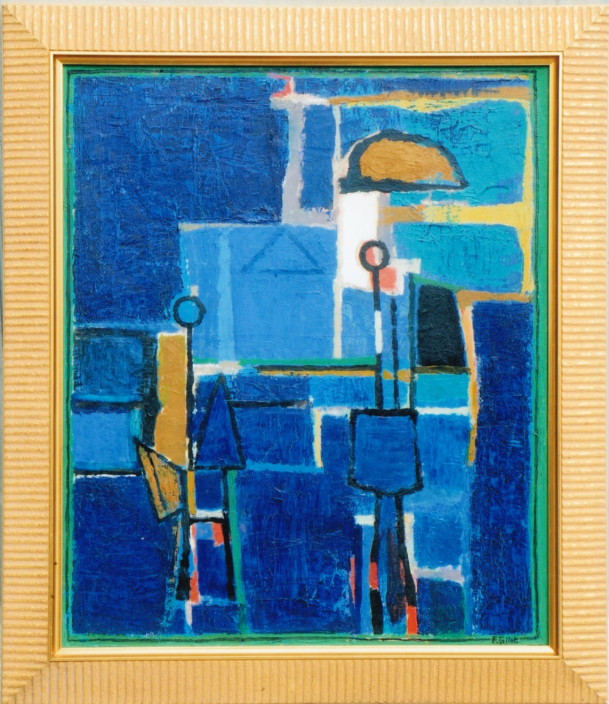 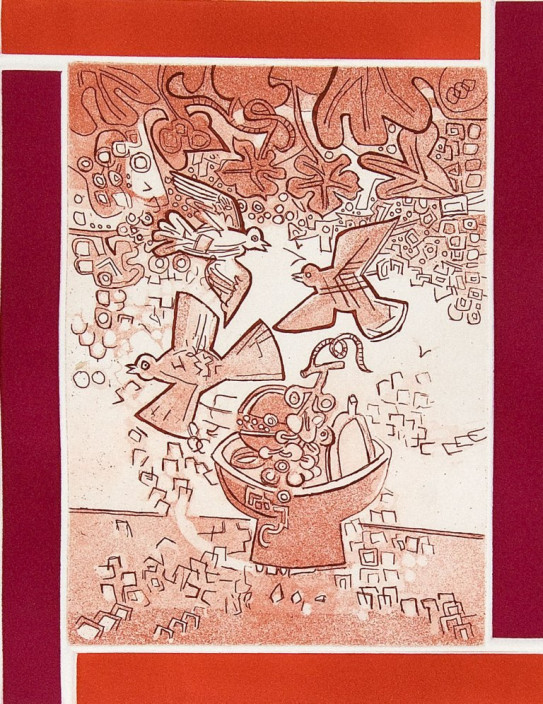 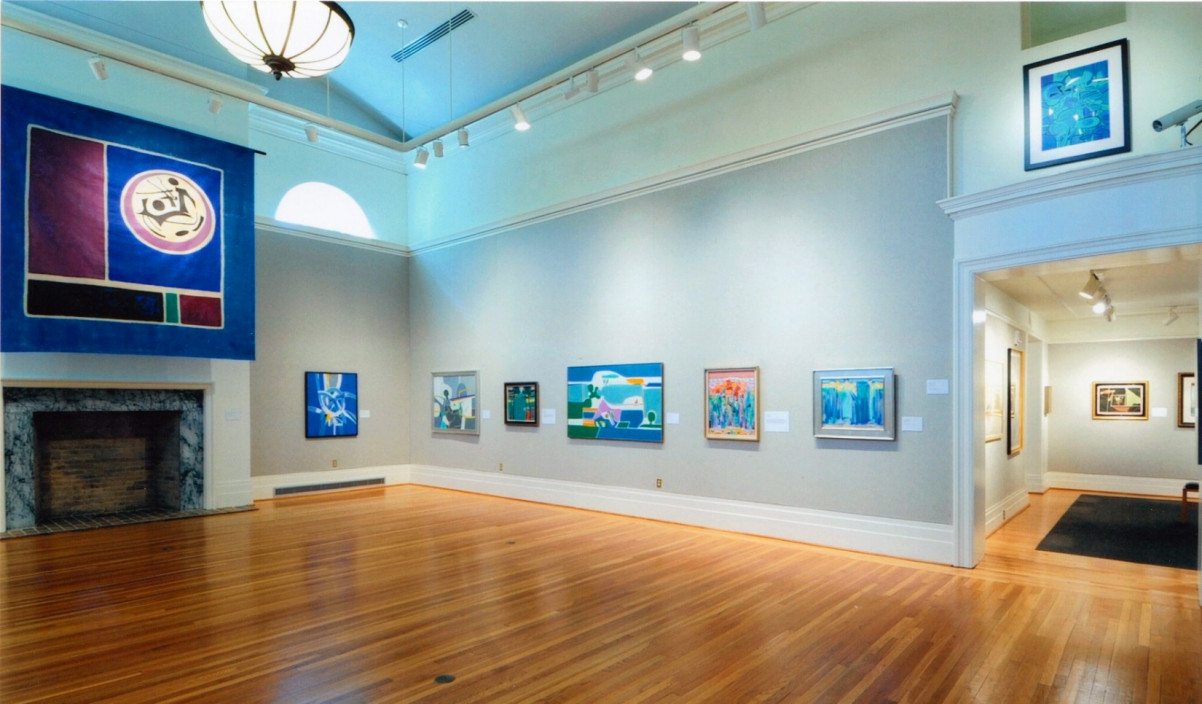 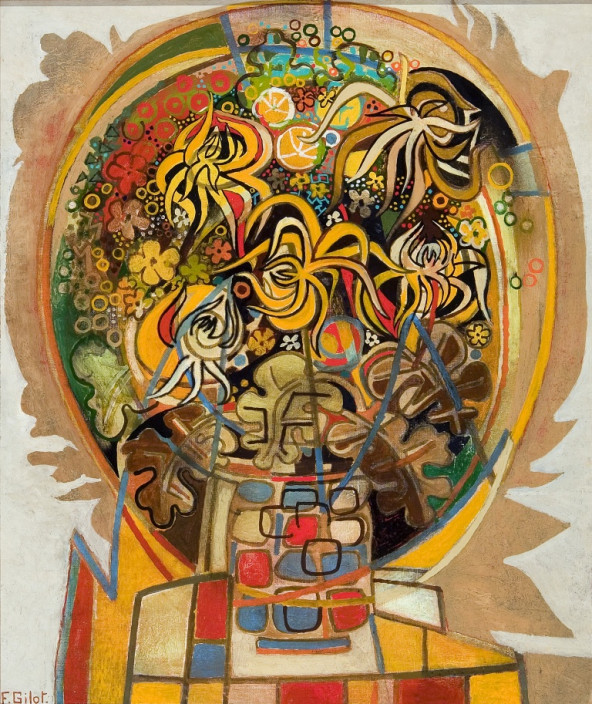 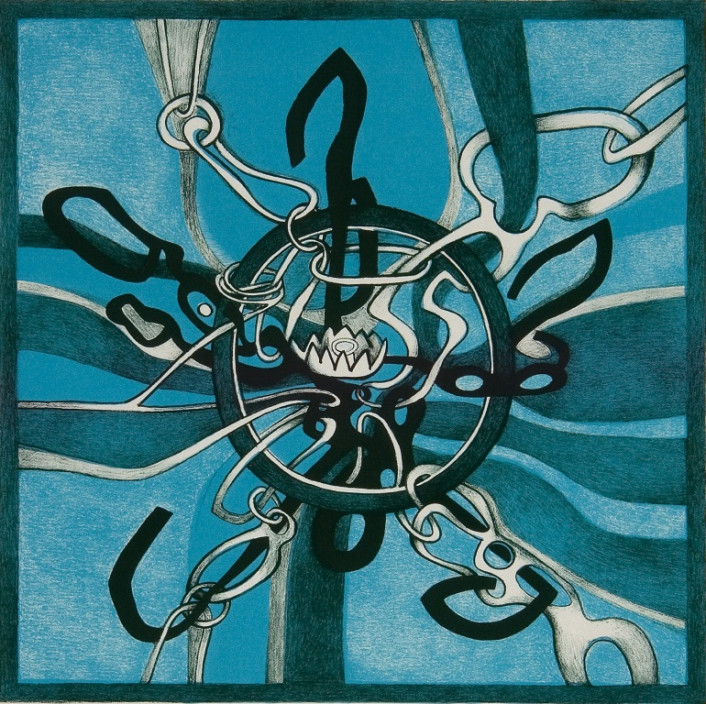 Transitions: Works by Françoise Gilot explores the artist’s trajectory with examples of seminal, though rarely exhibited, works from the early 1960s, when she was dividing her time between studios in Paris and London. It also explores her work from when she was beginning to establish herself in the United States.Curated by Mel Yoakum, Ph.D., this exhibition installation of over 50 oils, watercolors, gouaches, monotypes and original prints focuses on Gilot’s rich, symbolist style from the early 1960s and documents her transitions in color, content, and composition into the twenty-first century.

The “Labyrinth Series” has proven to be one of Gilot’s most original and important sequences, including greek mythology, personal mythologic, circus, and paintings that float between. Concurrent with creating the “Labyrinth Series” of paintings, which filled the years of 1961-1963, Gilot was also writing the text for her well-known best seller, Life with Picasso, exploring her ten-year relationship with Pablo Picasso.

“In 1943, during the time of her first important exhibition in Paris, Gilot met Pablo Picasso, an artist 40 years her senior. In 1946, Gilot and Picasso began a decade long relationship and Françoise became both a witness and a participant in one of the last great periods of the modern art movement in Europe. Their circle included poets, philosophers, writers and many legends of the art world, such as Braque, Chagall, Cocteau and Matisse. This artistic union was also shared with their two children, Claude and Paloma, whose antics and acrobatic postures were often captured in drawings and paintings.”

Mythology – Gilot’s approach was to throw conventions overboard and to allow her hand to follow her mental impulses toward the discovery of visual and pictorial equivalences to evoke the dramatic intensity of the myth.

Gilot’s paintings often pulsate with a dynamic rhythm. In 1973, Gilot undertook large compositions on the theme of the circus. Her interest was to illustrate perpetual motion, from the tumbles of the clowns, the somersaults from trapeze to trapeze, the dangers of the high wire, to the spectators’ hands applauding enthusiastically. Expressing balance and motion through the juxtaposition of color, form and light, the silhouetted figures express precariousness in each panel, echoing the surface tensions of the colors just being held in balance, thereby forcing a solar plexus reaction common to artists and acrobats alike.

In many of Gilot’s works she aims to create a vision by weaving together scattered fragments – part memory, part imagination – and making the whole as plausible as in a dream. Landscapes appear in plan view and elevation simultaneously, horizon lines are elevated, depth is foreshortened, compositions are color-focused and time is implied through symbols and signs. All is invented; having more to do with what Gilot feels or thinks about reality than from the direct testimony of her senses.

In 1980, Gilot began a series of works painted in thin layers of acrylic paint on unstretched canvases, which could literally “float” within space. Emancipated from the necessity of hanging on a wall, Gilot’s “floating paintings” are bold banners that levitate within time and space, free to respond to the presence of a passing observer.

Concurrent with Gilot’s interest in creating paintings that float between earth and sky, she also began exploring the medium of monotypes – unique works on paper created with spontaneity and freedom. Gilot relished the idea of bringing to this medium all her skills as a painter as well as a printmaker while focusing on the creation of a single print rather than a multiple edition. Gilot soon advanced her explorations through the incorporation of collage work, often including fragments of old engravings and Japanese papers to add rich textural interest to the surface while honoring ancient antecedents. Gilot’s technical virtuosity and painterly attitude dominate in these powerful works that are imbued with a mysteriousness of though and an implication that symbols are present if not decipherable.

Even after 70 years, Françoise Gilot continues to work as a painter wresting from form and color a visual statement, which is at once personal and universal. She is not content with the known; she views her task as an artist to transform and extend perceptions and to stimulate viewers towards new insights and experiences. Gilot believes that the creativity of an artist lies not so much in a desire to do or to make but rather in an inner necessity to be and to become. For this, there must be discipline, simplification, choice, and synthesis. And through Gilot’s explorations and transitions as an artist, we see how the vitality of tradition can be maintained while simultaneously moving forward into the uncharted territories of the art world continuum.

Interested in mythology, symbolism, and the power of memory, French-American artist Françoise Gilot expresses complex philosophical ideas with lyrical accessibility. Transitions: Works by Françoise Gilot features a collection of oil paintings and works on paper that highlight her interest in color relationships and the fine line between figuration and abstraction. Gilot uses abstract organic shapes to reflect her interest in the formal arrangements of lines and planes, tone-color coordination, and her respect for simplicity.

Transitions: Works by Françoise Gilot will focus on the evolution of Gilot’s approach to composition and color, beginning with her seminal Labyrinth Series and including key works into the twenty-first century. Rich abstraction in a bold, powerful palette, a mainstay of her work, transitions to references to the figure, botanicals and still life. Iconic images such as orbs, birds, water, and earth elements are investigated in tandem with color juxtapositions that are built up from many layers of pigment.

The exhibition explores the transitions in Gilot’s life and work that formed her artistic voice. Relying on structures, rhythms and color, Gilot often challenges the boundaries between figuration and abstraction by evoking rather than describing, to heighten the surface tension of the canvas and to entice and engage the imagination of the viewer. Featuring over forty works of art, including oil paintings, watercolors, gouaches, monotypes and original prints, this exhibition presents the evolution of Gilot’s unique abstract, symbolist style from the early 1960s to her more current work.

Also known for her earlier relationship with twentieth-century icon Pablo Picasso, Gilot resided for many years in La Jolla with her husband, polio vaccine pioneer Dr. Jonas Salk. Gilot currently divides her time between studios in New York and Paris.

The collaboration between Gilot and the Berman Museum of Art is a rich one, established some twenty years ago. Transitions represents a fourth exhibition of her work at the museum, where benefactors Muriel and Philip Berman have donated many works by Gilot to the permanent collection. The Berman family formed a friendship with Gilot, collected her works and commissioned several original lithograph editions. Later, the Berman Museum published the first catalogue devoted to her original prints, and hosted major exhibitions of her work in 1997 and in 2001, when Gilot was the recipient of an honorary degree from Ursinus College.

The exhibition is curated by Mel Yoakum, Ph.D., author of Stone Echoes: Original Prints by Françoise Gilot and a scholar of her work. He began his association with Gilot in 1987, organizing exhibitions and cataloguing her extensive oeuvre of oil paintings and works on paper. Transitions: Works by Françoise Gilot is generously funded by Romayne and Floyd Berk ’57, Jane and Eric Herzog, and Ilse Munzinger.