Alongside Dr. Kohn, I mentored FUTURE student Elana Roadcloud in a project concerning the effect of oxidative stress on the dopaminergic nervous system of C. elegans. The study we conducted used fluorescence microscopy to visualize the dopaminergic neurons of the organisms and assess the loss of neurons following oxidative stress. We set out to determine the type of cell death associated with oxidative stress induced by hydrogen peroxide as a model for Parkinson’s Disease. Elana and I have continued to work together in the lab for the last two years.

I plan to obtain my Ph.D. in Neuroscience and eventually conduct research in an academic setting. Mentoring in the lab for the summer of 2013 and the semesters following confirmed that the path I have chosen is the right one for me. I was able to gain a better understanding of my research by teaching Elana the techniques and background knowledge she would need to conduct research on her own. Participating in the FUTURE program also gave me the opportunity to earn an Honorable Mention for the Goldwater Scholarship. 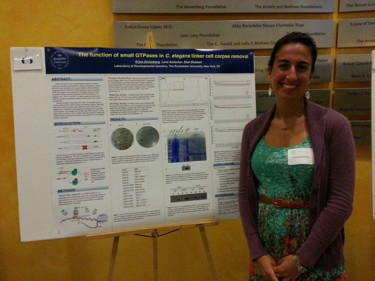 As a sophomore, I joined a research project studying the nervous system function of Caenorhabditis elegans in the lab of Dr. Rebecca Kohn, and in the summer of 2013, as a FUTURE mentor, I worked with Elana Roadcloud. Now an honors researcher, my study investigates the effects of changes in nervous system activity on neurodegeneration after hydrogen peroxide-induced oxidative stress in C. elegans. Crossing a GFP tag into strains with other mutations allows me to visualize the dopaminergic neurons and assess their loss using fluorescence microscopy. I set out to determine the type of cell death associated with oxidative stress using an apoptotic pathway mutant, eventually implicating apoptosis as the source of neurodegeneration. The results of this study are currently in the process of abstract submission to an undergraduate neuroscience journal. As my Honors project, I am studying the effects of dopamine on this process, using mutants that affect dopamine production and reuptake.

Elana and I had the opportunity to take our research to the 2013 Annual Meeting of the American Society for Cell Biology in New Orleans, Louisiana and presented in a poster session there.

Additionally, I have presented at the following conferences:

After graduation, I plan to continue and obtain my Ph.D. in Neuroscience. I am particularly interested in researching neurodegeneration and neurodegenerative disease at the protein and molecular level. Eventually, I hope to teach and conduct research in an academic setting where I can continue to mentor in addition to conducting research.