As her educational background suggests, Deborah’s teaching and research pursuits explore art and artistic practice as forms of social and intellectual discourse. She is passionate about sharing art with students and views it as significant to any undergraduate program. To this end, she regularly escorts student groups to the Philadelphia Museum of Art, the Institute of Contemporary Art, the Fabric Workshop and Museum, the Barnes Foundation, the UPenn Museum of Archaeology and Anthropology, the Eastern State Penitentiary Historic Site, the Hirshhorn Museum, the Metropolitan Museum of Art, the Museum of Modern Art, the Neue Galerie, Dia: Beacon, and Philadelphia and Chelsea gallery tours, among others. Her research has been supported by the American Council for Learned Societies, the Henry Luce Foundation, the Giles M. Whiting Foundation for the Humanities, and the Fales Library and Special Collections at New York University. She has presented work in national and international contexts, including Seoul, Milan, Venice, and New York, and recently served as Visiting Scholar in Residence at Lingnan University in Hong Kong.

Art in the Contemporary Moment

History and Theory of Photography

Economics of the Art Market

“The Eye of the (Be)holder: Collaboration, Reciprocity, and Performance in AA Bronson’s Parting (Self)Portrait of General Idea,” Exposure Journal of the Society for Photographic Education (Sept. 2014).

Received the 2014 Society of Photographic Education, Award for Excellence in Historical, Critical, and Theoretical Writing. Link 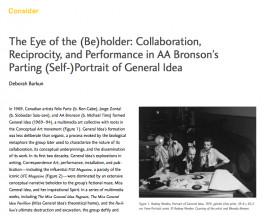 “The Scenic Views from Citywide: Towards a More Imageable Philadelphia,” CITYWIDE (Philadelphia: CITYWIDE, An Exhibition of Independents, 2014).

Received the 2010 Founding Presidents’ Award for Outstanding Original Scholarship from the Textile Society of America. Link