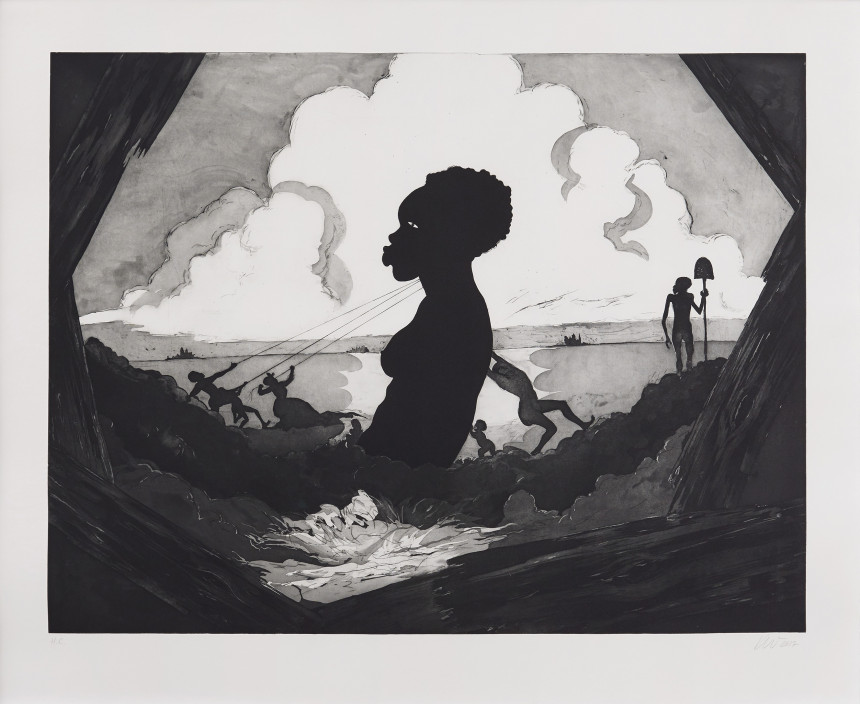 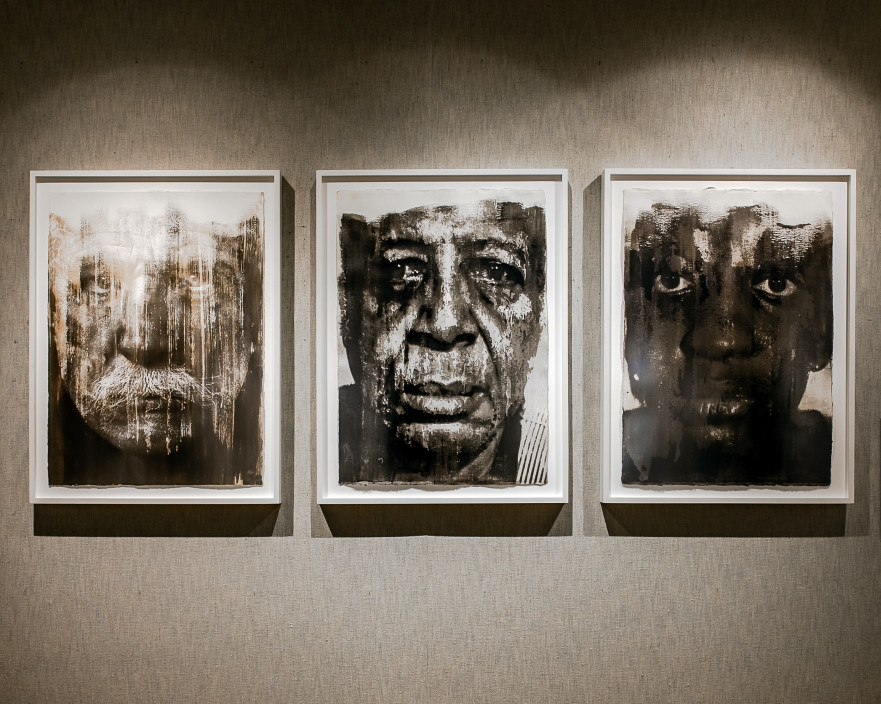 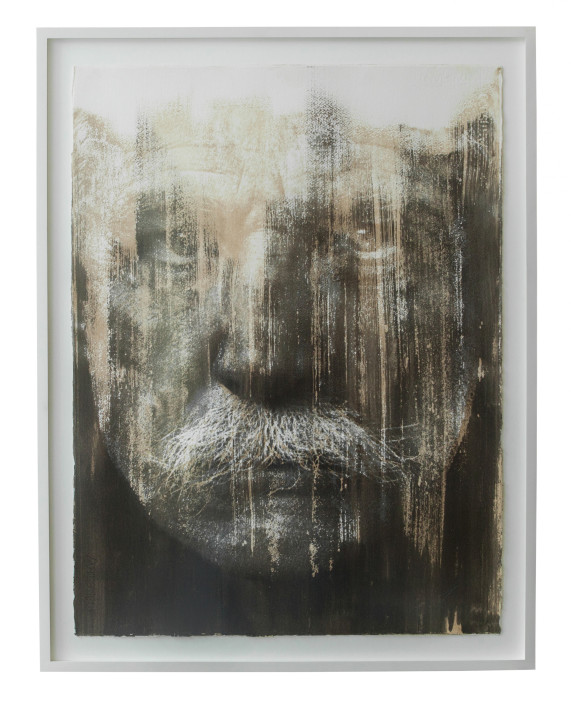 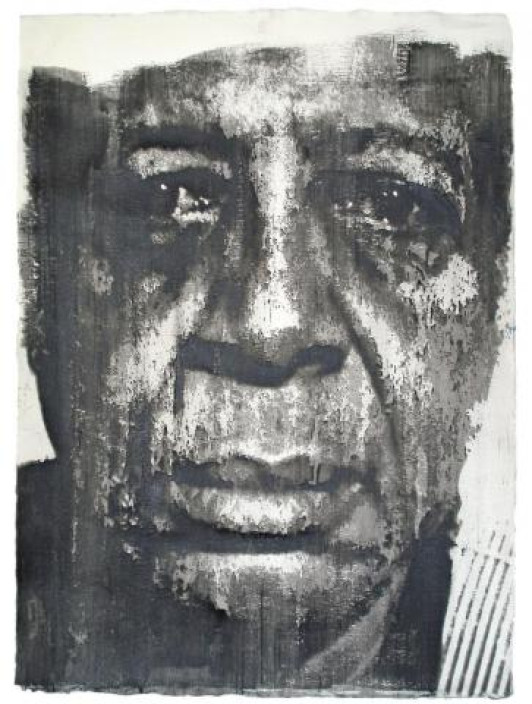 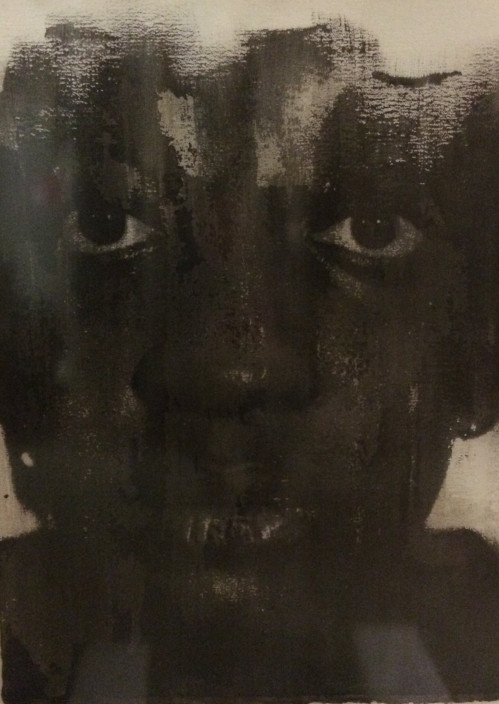 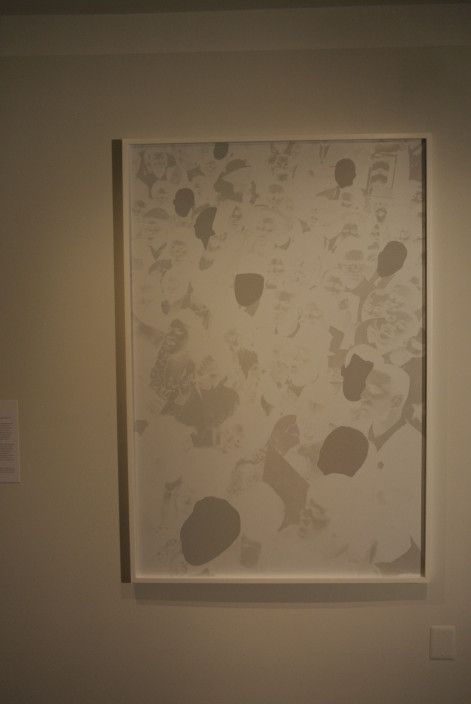 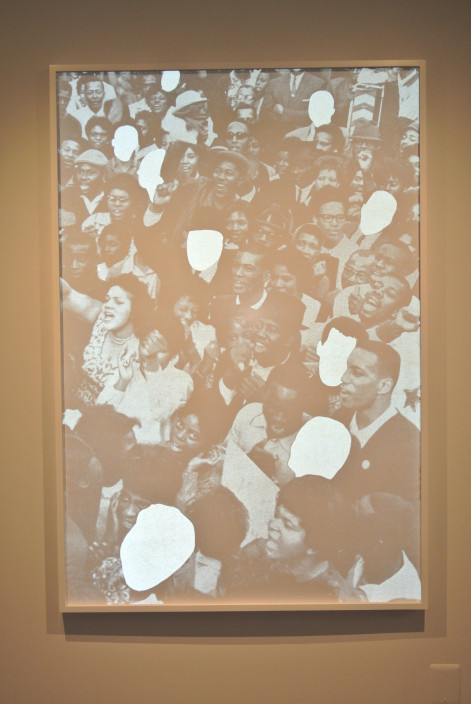 The Berman Museum of Art presents artwork from the permanent collection by three Black artists in honor of Martin Luther King Jr. Week.  Each artist helps to illuminate a Black perspective on the world.

Donald E. Camp began his career as a photojournalist and worked in journalism for ten years before receiving a degree in the fine arts. He is best known for his on-going series Dust Shaped Hearts, which sought to break down stereotypes of Black men by depicting individuals who have impacted their communities. Over time, Camp’s series of thoughtful and evocative portraits grew to include people of all genders, races, and backgrounds, as the effects of intolerance are felt universally.

Using a tightly cropped style, Camp confronts viewers with profound and tactile depictions of the human face. He processes his prints using a 19th-century, non-silver photographic printing process. Each print is made from a labor-intensive process of coating non-photographic paper with casein (essentially milk) and earth pigments. Camp then repeatedly washes the print, scrubbing away until the imagery is revealed to his liking. This process communicates a feeling of raw vitality in his subjects.

In the triptych displayed in this exhibition, Camp’s self-portrait is flanked on the left by William Larson, his mentor, and on the right by Mentee/Jennifer Perry, a former student.

Camp holds a BFA and MFA from Tyler School of Art in Philadelphia. He has been awarded numerous fellowships and grants, including the John Simon Guggenheim Fellowship, National Endowment for the Arts Fellowship, and Pew Fellowship in the Arts. Camp has previously exhibited at the Pennsylvania Academy of the Fine Arts, the Institute for Contemporary Art, and the Noyes Museum, among others. His artworks have been collected by various private and public institutions throughout the US, including the Philadelphia Museum of Art and the Pennsylvania Academy of the Fine Arts. Camp taught at Ursinus College until his retirement in 2012.

Kara Walker is a leading contemporary artist known for her investigations of race, gender, sexuality, and stereotypes through a cut-paper silhouette style typical of the 18th century. In her works, Walker recalls the history of slavery and its legacy in America. At first glance, her silhouettes appear like storybook pictures, but closer inspection reveals harrowing imagery in which subjects inflict or are inflicted with violence against a pastoral background. Walker’s disarming visual style, bordering on the grotesque, invites difficult conversations about racism in the art world and in society at large.

Resurrection Story without Patrons was recently acquired for the Berman Museum’s permanent collection. In this print, the torso of a nude Black woman is being raised by Black men, women, and children. Walker created the print following a 2016 residency at the American Academy in Rome. The classical artworks she saw in Italy, while the Black Lives Matter movement grew in America in response to police killings of unarmed Black men, inspired Walker to explore themes of martyrdom, memorial, and alternative history, as well as religion.

Walker received her BFA from Atlanta College of Art and MFA from Rhode Island School of Design. Her success as a professional artist began shortly after graduating, when, at the age of 28, Walker became one of the youngest individuals to receive a MacArthur Fellowship. Walker’s artwork has been exhibited at the Museum of Modern Art, the Whitney, and the Hammer Museum, among others, and is collected by institutions throughout the US and abroad.

Hank Willis Thomas is known for work using appropriated images and the seductive language of advertising to comment on persistent inequality and the marketing of commodity-driven aspirations to African American youth. Though it recalls previous works employing credit card company slogans, Intentionally Left Blanc takes a more oblique approach, quoting instead the foreign-seeming jargon of credit applications, which often include pages that are “intentionally left blank.”

The work equally refers to the role of media in framing reality through spectacle. Printed on a special retro-reflective paper, the image in Intentionally Left Blanc—an impassioned Black audience—only becomes visibly legible when exposed to a flash. Under the fast-paced influence of contemporary media, the meaning of a situation is determined in an instant and often subject to misapprehension—as here, in which the faces left blank and the sentiments of the pictured crowd become apparent only when illuminated by photographic flash.

Note: Only one screen print is shown. The retro-reflective paper looks like a white, negative image in natural light; when exposed to a photographic flash, the full image becomes visible.