Learn more about Dr. White and her legacy

Women of Ursinus Exhibit in Myrin 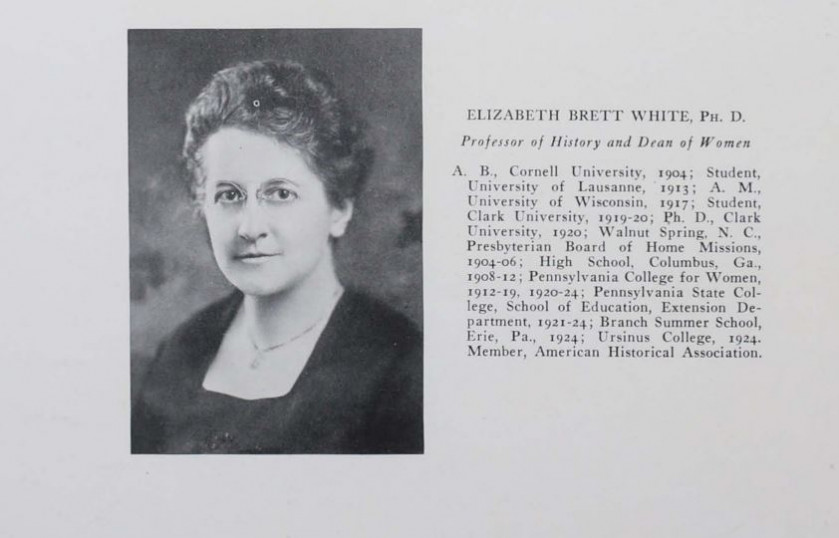 Dr. Elizabeth Brett White was officially elected as the first dean of women in 1924.

After World War I, there was a rise in enrollment at the college, especially a growing number of women students. In an effort to have the administration accurately reflect the changing demographics of the student population, President Omwake and the board created the Office of the Dean of Women in 1924, with Dr. Elizabeth Brett White officially elected to the role. In addition to being the first dean of women, White was also the first woman elected to professorial rank at Ursinus when she became a professor of history. Known for her devotion to others, Dr. Elizabeth B. White was dean of women until 1938 and later retired from teaching at Ursinus in 1947.

In honor of Founders’ Day, it was a great pleasure to me to learn more about Dean Elizabeth Brett White. Dean White was a critical figure in the college’s efforts to support women students well before the advent of co-education at larger, more prestigious universities. As a teacher, administrator, and scholar, Dr. White had an inspiring career—in addition to providing guidance and support for women students, she published two books, served as chair of history and taught in the department. We have a lot to learn about the history of women at Ursinus, and early pioneers like Dr. White offer a great place to start!

In 2021 we can easily take for granted the fact that roughly half the students and faculty are women. Yet, it behooves us to take a moment to recognize and celebrate people like Dr. White who paved the way for this reality. As we celebrate Dr. White, though, it is important to also recognize that there is more work to be done. Whether it is in the learned timidity in my female student’s voices (heard in the apologies with which they preface classroom comments and in the upward inflection at the ends of their sentences), or in my own self-consciousness about my emotional, exuberant manner of speaking, I am reminded again and again of the progress still to be made for women to take our rightful place in the academy. Further, as I work with colleagues thanks to the support of an Ursinus Inclusive Community Grant to help make Ursinus more inclusive of faculty and staff with children—work that is intended for all genders but that is grounded in feminist ideals and that pushes against masculine notions of the disembodied, professor who is unencumbered by family responsibilities—I am grateful to women like Dr. White who came before me and made it possible for me to raise my voice to and be heard today.