The Legacy of Bobby Fong

Bobby Fong, 15th President of Ursinus College, died Sept. 8, 2014. The campus and  the community came together to mourn the man who brought them together as good neighbors. 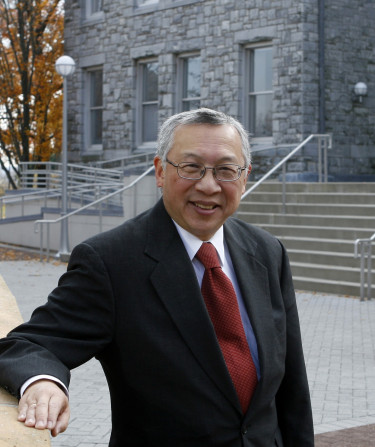 One of the few Asian American leaders in higher education, Bobby Fong was a scholar of writer Oscar Wilde, and a fan of baseball, which helped introduce this son of Chinese immigrants to American culture.

What is Bobby Fong’s legacy at Ursinus? He firmly believed that a liberal arts education “keeps on giving” to graduates, long after they have moved on in their chosen fields or found it necessary to learn new technical skills.

He believed that at Ursinus, the “cultivation of personhood” is taken seriously; that education contributes to the process of “individualization,” so that each student is afforded the opportunity to develop a sense of self in relation to the world.

In these pages you will find not only a snapshot of the 2013-2014 fiscal year, but also a broad portrayal of the Ursinus College liberal arts education that develops the qualities of intellect and character that Bobby Fong both lived and encouraged. There is no better tribute to Bobby Fong than for the Ursinus College community to embody what Bobby had to offer as a selfless and generous leader, mentor and advocate for the liberal arts.