In Haiti, the first school of optometry in the impoverished country’s history is slated to open this fall, offering the hope of access to eye care to millions of people. In New Jersey, hundreds of college students are serving as volunteer community health workers to connect vulnerable people to programs that can help them.

In Azogues, Ecuador, visiting teams of ophthalmologists and other medical professionals provide desperately needed eye surgery for many, and make arrangements for some who need major surgery to come to the United States to have it done. And at the Gennesaret clinic in Guatemala, a doctor now sees patients daily and follows up with those treated by more than a dozen teams of doctors and volunteers who visit every year.

All of these efforts, and many more, share one thing in common: Ursinus College alumni who have gone on to become physicians and willingly volunteer their talents and their time to serve the underserved, both in the United States and abroad.

For Aakash Shah ’10, who was honored at the White House in 2016 as a Champion of Change for the work of his nonprofit, Be Jersey Strong, it comes down to an idea that was instilled in him at Ursinus by the late Rev. Charles Rice, the college’s beloved chaplain.

Rev. Rice talked about “putting your head, your heart and your hands in conversation,” recalls Shah, who obtained his doctoral degree from Harvard Medical School and master’s degrees from Oxford University as Ursinus’s first Rhodes Scholar.

Shah’s determination to have his head, his heart and his hands in conversation led him to found Be Jersey Strong in 2015. The idea was to recruit and train students and send them into communities across the state to make people aware of their health insurance options. Within a year, the nonprofit had 500 volunteers from 20 college campuses across the state, and two-thirds of them spoke a second language.

So a lot of what motivated me early on was to ensure that their sacrifice wasn’t in vain.

“So they were able to get into a lot of communities that I think otherwise would have gotten overlooked during the open enrollment period (under the Affordable Care Act),” Shah says. “They did a great job connecting the uninsured to coverage across the state.”

With the uncertainty over the future of the Affordable Care Act, Shah has broadened Be Jersey Strong’s approach to have students serve as community health workers who can take a true social history of patients and help people “navigate the programs that already exist in the community, and thus help the health-care system reach beyond the four walls of the hospital.” 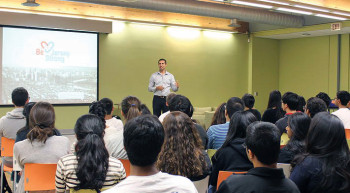 Aakash Shah '10 recruits volunteers at Rutgers University for Be Jersey Strong.Shah, who is in his second year of residency as an emergency room physician, says his efforts to serve the underserved stem from an appreciation for the sacrifices his parents made so he could get a quality education and from the realization that others had taken a stand for programs that helped families like his.

“It was very clear to me from a young age, albeit unconsciously, that my parents had in many ways given up their present for my future,” says Shah, whose parents emigrated to the U.S. from India in the 1980s. “So a lot of what motivated me early on was to ensure that their sacrifice wasn’t in vain.”

Later, under the guidance of Rev. Rice at Ursinus, Shah says he came to understand that “Someone, somewhere along the line made sure that the circle of opportunity in this country included folks like my family. Having realized that, I’m obliged and, quite honestly, compelled to pay it forward.”

David Rosvold ’80
“Get involved and do what you can.”

For Rosvold, a clinical cardiologist with Mercer Bucks Cardiology in New Jersey, the motivation behind the medical mission trips he has made to Ecuador and other countries comes down to “using my knowledge and realizing there’s a lot of need in this world, trying to fulfill that need in some little part.”

“I’m a 10 percenter,” Rosvold says. “I think 10 percent of your time, talent, effort and money should be given back. If everybody did that in this world, I think we’d have a pretty perfect world.”

Rosvold has volunteered with medical mission teams to work with a hospital in Azogues, Ecuador, over the years. He has gone down there eight or nine times, helping with an eye-care team organized by Healing the Children that does routine surgeries for cataracts and glaucoma.

On the trips, the cardiologist serves more as a pediatrician.

“I do the screening and help out,” Rosvold says. “I basically function as a medical person—make sure the kids are healthy, make sure they don’t have any health issues, such as heart murmurs, that would make them at risk for getting anesthesia when they’re getting surgery, and then help in recovery when we wake these kids up. And help the nurses to get them safely on their way.”

Rosvold also volunteers with other charitable organizations, including an annual charity bike ride to benefit Anchor House, which works with abused, homeless, runaway, at-risk and aging-out youth from Trenton and throughout Mercer County and the state of New Jersey. Rosvold, an avid bicyclist, has done rides to raise money for other charitable causes as well.

People don’t have to travel to another country to help those in need, he says.

“Get involved and do what you can,” Rosvold exhorts. “There’s a lot of need right around the corner. You don’t have to go around the world to do this. You can do it down the street, I’m sure.”

Over the years, McPhillips has made more than 50 medical mission trips to provide eye care to those in need in numerous countries, thanks to his involvement in Volunteer Optometric Services to Humanity (VOSH) International.

In recent years, much of his focus has been on Haiti. McPhillips co-founded VOSH PA, the Pennsylvania chapter of the organization, with fellow Ursinus and College of Optometry classmate Jack Hauler ’80. The organization helped develop a self-sustaining eye clinic in Haiti, just as it had previously in Guatemala. 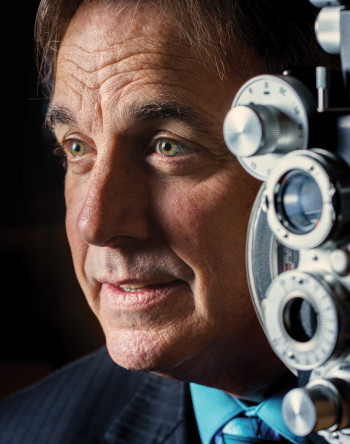 David McPhillips '80 has worked to provide eye care to patients in Haiti through an organization he co-founded.And teams from VOSH PA continue to make four or five trips to Haiti each year, providing free glasses, surgery and medication. The teams also bring surgical supplies for cataract and glaucoma surgery, and pay the Haitian surgeons for their time to do the surgery.

But McPhillips would like nothing better than if a major project VOSH has helped build makes future trips to Haiti unnecessary.

“The Haiti School of Optometry is going to make a huge difference,” says McPhillips, who served as president of VOSH International from 2013-15. “The plan is to graduate about 16 optometrists a year in a five-year program. That means in 10 years, there will be about 80 new graduates out there and they’ll be able to provide care to 350,000 Haitians every year. That’s where you’re really going to make huge inroads with prevention and providing care.”

McPhillips flew down to Haiti in July for the signing of the historic memorandum of agreement establishing the first optometry school in Haiti’s history. At the time, there were only three optometrists and 58 ophthalmologists (six in the public sector) to serve Haiti’s population of 10 million people. Half of the ophthalmologists practice in Port au Prince, the capital city with about three million residents.

“That means there are seven million people who basically don’t have any eye care at all,” McPhillips says.

The school is a collaboration between l’Université d’Etat d’Haiti (UEH), Brien Holden Vision Institute, Optometry Giving Sight, VOSH International and Charity Vision, with support from the University of Montreal.

When asked why he devotes so much time and energy to volunteer work, McPhillips, who has been in private practice in Horsham, Pa., since 1994, replies: “Just because I can do it, and I think it’s important. And I’m also blessed with a wonderful wife and two amazing children who are very supportive.”

After the tragic events of Sept. 11, 2001, Schaebler found himself taking stock of his life.

One day the following spring, a friend who Schaebler played tennis with—who happened to be a local pastor—asked him to sign on as a doctor on a team going down to Guatemala on a medical mission trip.

“Everyone was doing a lot of soul-searching back in those times, and I was too,” Schaebler recalls. “I was 40 years old, I was an oncologist. I always thought maybe when I’m 70 I’ll do something like that, go to Guatemala or do that when I retire. When he asked me the question, I thought, ‘Why not do it now? Because you’re not guaranteed to live to 70 anyway.’” 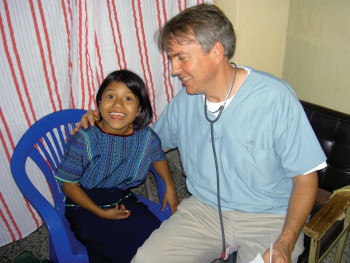 David Schaebler '84 has been part of medical mission teams delivering healthcare in Guatemala.So he went, and has been back every year since.

“It was life-changing,” he says. “The hospitality, the people, the beauty and then the need. What really struck me was the need. There’s no access to healthcare.”

Schaebler says the most gratifying thing he has been part of was the effort by a couple of churches to raise funds to sponsor a doctor who runs the Gennesaret clinic in Guatemala. When the medical mission teams visit, they often identify patients who need follow-up or someone to arrange transportation and get patients the surgeries they need after the team leaves. Now, there is a doctor there to provide it.

While it often seems that Ursinus graduates have service in their DNA, with Schaebler, that may literally be true. And there’s some Ursinus DNA mixed in as well.

“It’s the same feeling of going where you’re needed most,” Schaebler says. 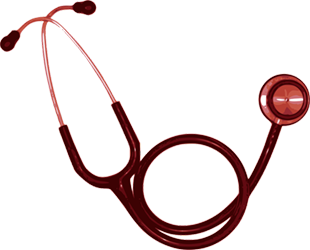 Last year, 65 percent of all Ursinus students volunteered in the community through opportunities offered to them by UCARE by way of partnerships with more than 30 different community agencies.Read about this passion for service.