"Beneath the Soil"
URSINUS Magazine
, Fall 2018

Just across a secluded, winding road from the Ursinus campus, tucked back by Hunsberger Woods on a quiet, two-and-a-half-acre tract of land, is the college’s own slice of farmland.

You might not even know it exists— unless you happen to be an Ursinus rugby player stopping by on your way to the practice field—if you’re simply passing through Collegeville down busy Main Street, heading toward bustling Germantown or Ridge Pikes. But it’s there, vibrantly green and typically busy with sustainability fellows; a greenhouse, a barn and an outdoor sink with a water pump adding to its charm.

Established in 2004, the Ursinus organic farm wasn’t always like this, at least in recent years. Kate Keppen, director of sustainability, joined the Ursinus staff in 2016. Prior to that, the farm was unmanaged and unused for a little more than a year while the office of sustainability was being reshaped. 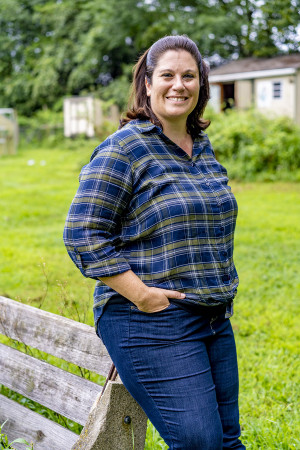 Kate Keppen, director of sustainabilityShe immediately set to work tackling the massive job of restoring it to a working, thriving farm. But before anyone could dive into growing any of the sought-after vegetables again, there was a lot of work to do: rehabilitating the community plots, fixing fence posts and cleaning up what nature had taken back.

Two years later, roughly a quarter of an acre of the land is actively farmed while the rest is used for leisure and teaching opportunities.

But that only tells part of the story—the part that’s on the surface.

Beneath the soil—well, that’s where the real work begins.

“We’ve really gotten away from taking a look at what’s happening underground,” Keppen says generally of farming practices. “There’s a rich environment underneath the soil made up of invertebrates, bacteria and fungi that make an intricate, unseen food web and help to release nutrients that our plants can use.”

“We’ve been farming as a culture for thousands of years,” Keppen says. But rather than pay close attention to the biology of soil, “the goal was to grow food quickly, in large abundance, and with minimal costs,” particularly after World War II and the onset of innovative agricultural technologies, she notes.

“So, when I talk about soil health, it’s really about how our soil can function in a way that supports our plant health,” Keppen says.

One of the most important goals for Keppen, along with faculty and student researchers at Ursinus, is to farm organically, sustainably and by considering the sometimes-overlooked impact of soil health, something that isn’t ignored here.

Denise Finney, an assistant professor of biology, says there are a lot of different ways to measure or assess soil health and the scientific community is still trying to figure out what makes soil “healthy.”

“At the same time we’re doing a lot of work to help farmers in particular build soil health,” she says.

“We know that greater attention to soil health is the way we can sustain food production over the long term and hopefully support sufficient food production to feed global populations.”

Finney works closely with her students at the organic farm, as well as on the Robert and Shurley Knaefler Whittaker Environmental Research Station (WERS) on Third Avenue in Trappe, to approach the vital questions surrounding soil health. 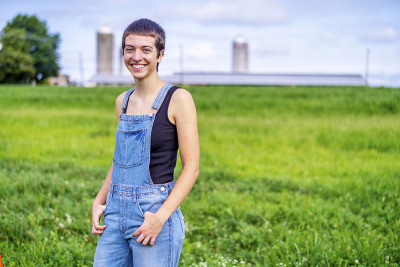 Madison Moses '20One such question is particularly relevant to organic management systems, a topic with which Madison Moses ’20 is intimately familiar.

Organic farmers, Moses says, must use different techniques to manage weeds, pests and fertility because they can’t spray chemical pesticides or use chemical fertilizers. On any given day out at the campus farm, Moses can be found taking soil samples with a soil probe, a device that looks similar to a pogo stick. Her goal? To track nitrogen to make sure there is enough for her plants, but not so much that this important nutrient becomes a pollutant.

“I compare nitrogen dynamics in the soil to see how the systems organic farmers use to manage weeds— like tilling or applying straw or black plastic mulch—can affect nitrogen leaching and plant growth based on soil nitrogen concentrations and, specifically, nitrogen mineralization,” she says.

It’s a project that Moses, an environmental studies major, designed on her own in consultation with Finney.

Finney’s own work investigates ways to increase crop diversity in agriculture and, in turn, the ecosystem functions that support food production and reduce environmental pollution from agriculture. And Cory Straub, an associate professor of biology, studies the ecology of insects in agricultural systems, with the goal of identifying management strategies, like increased crop diversity, that reduce the need for insecticides that threaten environmental and human health.

“They’re going to be the problem solvers of the future,” Finney says of the students actively involved in this research.

“It’s challenging to do these kinds of research projects at a smaller school where we don’t have all of the resources that a big agriculture school has. But we have the people, and we can have unique conversations across disciplines, and we can prepare students in a very holistic way to deal with major challenges to sustainability.” 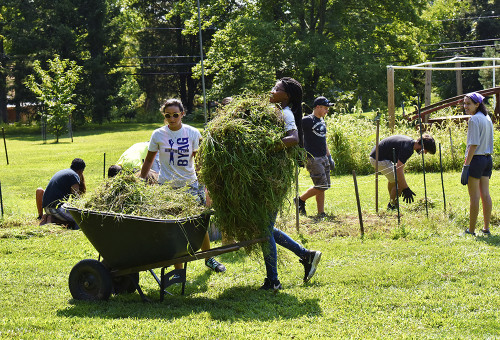 Beyond the research, dedicated students like Moses plant and tend to crops and help with volunteer opportunities on the organic farm, which attracts students across all disciplines to volunteer. From chemistry students to dance majors, everyone is welcome and encouraged to become an active part of creating an environmentally friendly campus.

“We have volunteers from Greek organizations, sports teams and people who just feel like coming out,” says Jess Greenburg ’21, who, like Moses, is an Ursinus sustainability fellow. “Just seeing people reconnect with the land that grows their food is really cool.”

“Some folks see it as a place to grow vegetables for the college’s cafeteria. They see it as a production farm,” Keppen says. “Other folks see it as a great learning opportunity for classes and research with hands-on learning for students. Some think of it as a hub of innovation and sustainability. We’re all of that.”

The interdisciplinary area of study draws upon courses in environmental studies, biology, politics, philosophy, anthropology, health and exercise physiology, psychology and other areas.

“We want students to experience the food system from a number of different perspectives: How society interacts with the food system, how food shapes culture and vice versa, and the biological and ecological aspects of food production,” says Denise Finney, an assistant professor of biology.  Details