Lauren McGrath ’12 is almost knee-deep in water. Morning clouds are giving way to sun, a welcome respite from the endless rain that saturated eastern Pennsylvania about a week earlier.

She gently lowers one end of an instrument into the flowing Ridley Creek and lets it dangle from a long cord while she studies numbers instantly produced on a digital screen on the other end. It’s measuring water conditions in real time.

Minutes later, a short walk along a muddy path leads to another instrument—this one not a portable tool, but a permanent fixture on the bank of the creek—called an EnviroDIY sensor station. It measures water temperature, conductivity, depth and, perhaps most importantly on this day, turbidity—a description of water clarity typically dictated by the concentration of the sediment suspended in the water.

“With all of the rain we’ve had this summer, we’ve had a lot of flood events that have allowed us to capture all of the muck and the mud that’s been transported,” Lauren says.

She points to an area near the walking path where displaced debris had been abandoned after the creek’s overflowing waters began to recede. “You can see where the water line was. This whole area was covered. You couldn’t walk here.”

Lauren is the director of the Watershed Protection Program at Willistown Conservation Trust in Newtown Square, Pa., where she conducts water quality monitoring throughout the Ridley, Crum and Darby Creeks. The trust covers 190 stream miles. The goal of the protection program is to ensure the long-term health of these streams through monitoring, restoration and best management practices.

After the deluge, Lauren’s work becomes even more significant. “We’re quantifying how much sediment was moved during one three-hour storm event,” she says. The sediment that has made the journey could have a major impact on water quality downstream.

“Everything we do on land impacts water quality, from how we mow our lawns to how we maintain our open space,” Lauren explains. “And by focusing on that, it shifts the framework of how we look at water.” 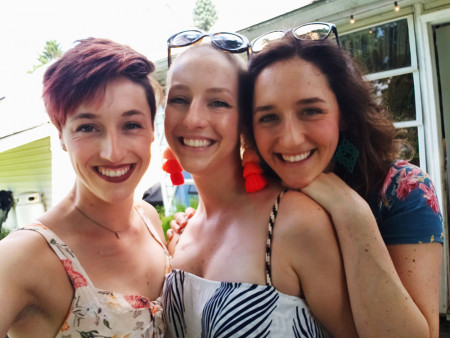 The McGrath sisters, Olivia '15, Lauren '12 & Emily '07“It’s not only a land feature. It’s a dynamic living system. Improving water quality in your immediate area benefits your downstream neighbors who you may never meet. As stewards of the headwaters of these streams, we’re responsible for quality of water for everyone else.”

Stewardship of the world’s waterways is a responsibility that Lauren and her sisters, Emily McGrath ’07 and Olivia McGrath ’15, are taking very seriously. In the pacific northwest of the United States, Olivia spent some time working for a nonprofit organization that monitors how beavers influence Washington’s streams; mentored high school students on marine science at the Seattle Aquarium; and is currently a community volunteer focused on improving the health of Puget Sound while preparing to pursue her master’s degree.

And a world away, Emily is preparing for a trip to Australia, where she’ll work in tropical systems researching sponges. She recently earned her doctoral degree at Victoria University of Wellington, New Zealand’s largest research university.

It’s a typically warm Thursday afternoon in August when Emily Skypes with Ursinus Magazine, but in New Zealand, it’s winter.

In her role as a postdoctoral assistant, she spent some time at the Fiordland National Park, known for its glacier-carved fiords, where she worked with the Department of Conservation on a project assessing deep water systems in this protected area, primarily focused on protecting an ecologically and culturally important place on the South Island.

“The work was really cool just because it’s largely an unknown ecosystem,” she says. “For the most part, it’s considered fairly pristine. It’s really important for the native New Zealanders—the Maori people—because it’s considered a sacred place to them. If that area were to be degraded, it would really affect New Zealand’s waterways.”

It’s a deviation from the work she’d previously done—which was centered on tropical ecosystems, giant barrel sponges and coral reef ecology—but the end game is the same.

“It’s trying to assess damage caused by people, and trying to determine how we can mitigate it,” Emily says. “In the event that’s not possible, how can we stop further influence from people?” 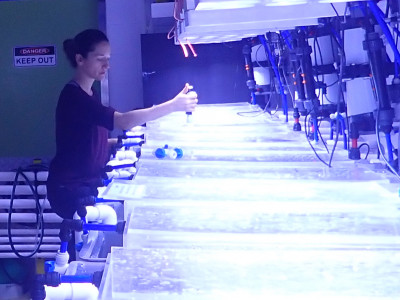 Emily McGrath '07 works in a lab in Australia.Emily’s research lab is primarily underwater and she says her passion for the world beneath the surface has roots at a diving club at Ursinus.

“If I could stay down there all the time, I would,” she says. “It’s incredibly quiet and meditative. You can focus on exactly what you’re doing. [Being underwater] certainly makes it more challenging, compared to doing work in a lab, but it’s more representative of natural processes in some instances.”

Now, working in collaboration with the Australian Institute of Marine Science, Emily will focus on climate change impacts on a variety of organisms within coral reefs at the National Sea Simulator (SeaSim), a world-class marine research aquarium facility.

“Once such a prominent member of an ecosystem declines or disappears [in this case, corals], what replaces it will represent a shift of all the ecosystems on the reef,” she explains.

Back in the United States, Olivia McGrath is focused on Puget Sound, an inlet of the Pacific Ocean along the northwestern coast of Washington. It harbors a diverse group of ecosystems and organisms.

We have everything from cold water corals to the iconic orca,” she says through an email exchange with Ursinus Magazine. “What makes this system so unique is its proximity to the city and civilization; its cultural importance and the diversity of life.”

However, she says the sound is at a high risk of both chemical and sound pollution, runoff and destruction.

“So many species rely on the sound to raise young and feed, making it that much more important to preserve and prevent any further damage,” she says.

Even as someone who didn’t grow up in an area where marine mammals are common (the McGraths are from Benton, Pa.), Olivia says she quickly developed “a passion and empathy for conservation of marine mammals that use the sound every day.” 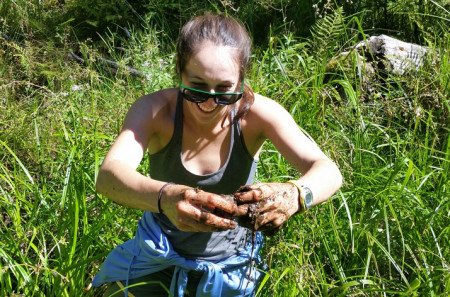 Olivia McGrath '15But perhaps one of the most rewarding parts of her experiences has been mentoring young people who share her passion for conservation.

“To have the ability to help teens figure out their paths in life and potential careers was such an honor,” she says of her time at the Seattle Aquarium. “This role wasn’t just science education, but also teaching life skills, job etiquette and time management.”

In one instance, a high school student told Olivia that the the aquarium’s Youth Ocean Advocate program was particularly meaningful to him. That conversation “solidified why I am in this field,” she explains. “Even if I am not directly working in the field, I can still inspire others to make a difference in their own way, and that is invaluable.”

No matter where they are in the world, and even dating back to growing up on a farm in Benton, or getting their feet wet in Ursinus research labs, the McGrath sisters are each focused on one goal: sustaining a thriving and diverse ecosystem for years to come.

“That we all ended up doing something with water is incredible, and I guess a little odd,” Emily says. “I’m extremely proud of them.”

“We span the gamut from the headwaters down into the ocean in our interests,” Lauren says. “I think that’s pretty neat.”