Leah Garrity ’15 isn’t all that far from home.

At least, it doesn’t feel that way.

With its beautiful, flowering trees, walkable pathways, and leafy suburban location—not to mention its liberal arts curriculum—Lingnan University in Hong Kong sounds a lot like Ursinus College. But the similarities go beyond aesthetics. 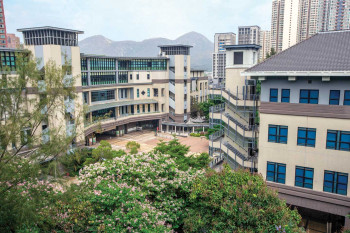 “It’s bigger, but it has the same small campus feel as Ursinus,” says Garrity, a visiting service learning tutor at Lingnan. “Students are really involved, and there are small class sizes where they can have a close relationship with professors. That reminds me of Ursinus.”

Faculty members from Chinese University of Hong Kong have attended Ursinus’s CIE (Common Intellectual Experience) Summer Institute, in which instructors work through the semester’s texts in an intensive two-week discussion group. Additionally, Ursinus has sent faculty to all three partner institutions to conduct faculty development workshops as they expand their programs, and has supported programs in student development, such as Lingnan’s student consultant program and service-learning office.

“While the history of this partnership is short, it reflects what a small liberal arts institution like Ursinus and large institutions halfway around the world have to learn from one another,” says Meredith Goldsmith, a professor of English and assistant to the president for strategic initiatives at Ursinus.

Lingnan is the first university in Hong Kong to have an office dedicated to service learning and, each year, at least 800 of its students participate in service learning opportunities. Garrity and Briana Keane ’16 are currently working as visiting service learning tutors in Lingnan’s Office of Service Learning, and Ursinus students have been serving in that capacity since 2014. 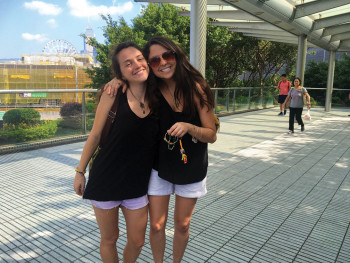 Leah Garrity '15 and Briana Keane '16 are visiting service learning tutors at Lingnan University.“This opportunity is a combination of two things I’m passionate about: service learning and studying abroad,” Garrity says. “It’s really inspiring to hear how service learning has affected the Lingnan students and how they’ve become more engaged in their learning. Their education is very experiential and they own it in the same way Ursinus students do.”

To broaden their understanding of service learning, Lingnan sends its own teaching assistants to Ursinus to experience different service learning models, like Ursinus’s Bonner Program. Those students gain insight from Goldsmith; Kelly Sorensen, an associate dean and associate professor of philosophy and religion; and Christian Rice, assistant dean for civic engagement. 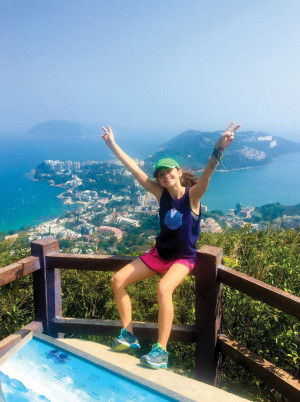 “My time at Lingnan challenged me to reconsider the way I saw myself and how I work with others,” says Duffy, a visiting tutor from August 2015 to August 2016. “It was a huge growing experience to hold my first full-time position in such a multicultural environment.”

Keane, who works with Lingnan students interested in international service learning, says, “I really like having a deep connection, and I wanted to apply that in an international context by making those connections with my students at Lingnan. I consider myself a global citizen and I feel like I can train them in the ways that I’ve learned how to be a global citizen thanks to Ursinus.”

In 2012, Hong Kong’s educational reformers uprooted a curriculum focused on rote learning and the encouragement of its students to become specialists in their fields, and began embracing what is described in Hong Kong as “whole person education.”

That model may sound familiar to American liberal arts colleges, but it goes even further than fostering curiosity and creative thinking. It emphasizes human development intellectually, socially, physically and spiritually.

Goldsmith is the founding director of Ursinus’s Teaching and Learning Institute, which supports the professional development of faculty. In 2014, she brought two Ursinus students employed by the TLI to Lingnan to help launch their Student Consultant Program, which trains students and professors to work collaboratively on creating optimal learning environments in the classroom.

At Ursinus, student consultants sit in on a course taught by their faculty partner and meet with them regularly, providing feedback to help improve the class and classroom dynamics. A similar program was developed at Lingnan in 2014 by Liz Ho, an associate professor of English who used to teach at Ursinus.

“The student consultants at Lingnan University can play a unique role in that change—helping faculty transition to an environment where there is more conversation in class, and more emphasis on participation and student engagement,” Goldsmith says.

Goldsmith traveled to Hong Kong in February to assess the consultant program. She says, “I think what Liz has done is create this space where faculty and students can really talk to each other. What’s been challenging about it is that there hasn’t really been a tradition there of students talking to their professors in a way that students would do in the United States, and certainly not in a casual way. I think the students can be ambassadors for that, and that’s one of the ways Liz has made the program unique.”

During her time in Hong Kong, Goldsmith also met with representatives from Hong Kong Baptist University to review their general education program, and she recently helped lead a summer symposium where the institutions traded experiences in liberal arts teaching.

“In Hong Kong, there can be an overemphasis on just academics,” says Frank Luk, senior advisor to the president at Hong Kong Baptist University. “And that was the only criteria in which a young person would be judged. I think, even though our institutions are different, we have developed fresh, new viewpoints on the whole person education through our relationship with Ursinus faculty.”

“They’re committed to helping students become more engaged and empowered,” Sorensen says. “And one thing they do really well that I think we want to do with CIE is to look at scientific texts critically and read them in a more humanities-driven way.”

The goal of the Chinese University of Hong Kong program is to create a common learning experience for students that connects learning to life experiences, to develop a more global perspective on issues, and to reflect on the human experience.

In a 2013 Huffington Post opinion piece, the late Ursinus President Bobby Fong, who served on the board of the Lingnan Foundation, wrote, “Citizens of the future need to be able to recreate themselves; they need a liberal education where they learn how to learn. Liberal education … necessarily addresses the development of the whole person, a training not only of the intellect, but of disposition and character.”

During his tenure as Ursinus president, Fong spoke to students, faculty, and administrators at Lingnan University and Hong Kong Baptist University about general education and high-impact pedagogies. “They … understood that education was the royal avenue to advancement,” Fong wrote in 2013. “Together, we quickly agreed on the primacy of education as the means for both individual and national progress.”

Today, Ursinus is building on the premise that Fong established, and its faculty and administrative leaders continue to advocate for the advancement of liberal education and civic engagement opportunities for Ursinus faculty and students in Hong Kong and beyond.

“By helping us view the liberal arts mission from a very different perspective—that of another country, culture, and educational tradition—our Hong Kong partners reaffirm the aims of liberal education,” Goldsmith says. “Their whole-hearted embrace of this educational experiment can reinvigorate our excitement about our core mission.” 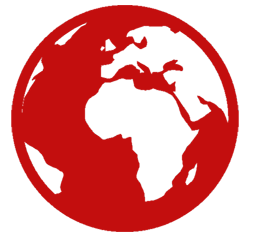