Joe Melrose shared thousands of stories with his students.

“He spent decades in some of the world’s most awful conflict situations,” Strainic remembers. “But one of the things he was trying to impress upon us was the importance of building personal relationships.”

Those stories—and his advice—still resonate with her today.

“I see it every day in my job,” she explains. “Whether you’re negotiating a peace deal in Sierra Leone during a civil war or negotiating the budget for a special political mission for the U.N., you’re dealing with people who come from very different backgrounds and very different experiences. You need to find a way to establish some level of familiarity and trust.”

The examples Strainic uses aren’t hypothetical. Melrose is best known for serving Sierra Leone during its civil war and brokering a peace treaty to bring an end to hostilities. Strainic respectfully refers to him as a mentor and a father figure and credits him for her career path.

She is a diplomat to the United Nations at the U.S. Mission in New York, representing the United States in negotiations with 193 other countries in the U.N.’s General Assembly, usually focusing on budgetary issues and peacekeeping operations. Strainic also supports negotiations in the Security Council, which determines the existence of a threat to peace or act of aggression.

“A lot of what I handle is technical. It’s wonky,” she says. “It’s not the high-tension political stuff. I’m not doing North Korea sanctions. I’m more in the weeds. We are on the front lines.”

Strainic leads four or five negotiations a year, which can last for weeks— and sometimes months—at a time. She may call it wonky, but it’s the technical aspect of the job that she loves. Her committees, she says, are policy- and administrative-oriented, dealing with human resources and civilian protection issues, such as sexual exploitation and abuse by U.N. peacekeepers toward members of local populations.

It’s a grim reality, but she has led several negotiations “that have really moved the dial forward” to protect the victims, passing a resolution aimed at preventing sexual exploitation and abuse by those under U.N. mandate. She says it’s one of her proudest moments as a diplomat.

“There are a lot of discouraging moments where it feels like you take two steps forward and one step back, but when you do have those moments where you see a resolution gaveled through in the General Assembly, there is no better feeling in the world.”

It can be hard to turn on the news and not worry about the state of world affairs. Headlines trickle in concerning Russia, China, North Korea and Syria. There are crises in every corner of the world; threats that seem like they come right out of a script for a Hollywood summer blockbuster. But it’s real life.

“I’m more in the weeds. We are on the front lines.
We are the ones doing the negotiating.”

Strainic has spent 2½ years— spanning the Obama and Trump administrations—on the job at the U.N. No matter who sits in the Oval Office or which party holds the purse strings in Congress, she says that everyone in the world is watching what is happening in the U.S.

“There is certainly an impact on my work, sometimes for the better and sometimes not, depending on the U.S.’s policy,” she says. “That’s also true of our bilateral policies. There’s no way to insulate my negotiations fully from whatever is going on at that level, but it’s important to not focus on things that are beyond my control. It’s best to keep that separate as much as possible and try to forge cooperation based on the issue we are dealing with at the time.”

“Working at the U.N., you’ll never find a more hardened group of idealists anywhere,” she says. “It gives you hope that there are a lot of people out there trying to make things better.”

In those instances, Strainic often draws upon that relationship-building advice from Melrose. “I try to approach situations the way he would,” she says. 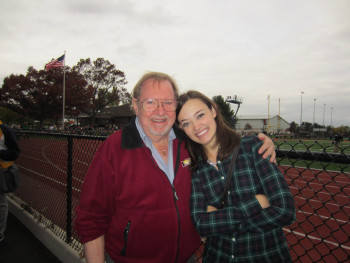 Melrose embodied the ideal of global citizenship and, while at Ursinus, advocated for a liberal arts curriculum that cultivated sensitivity to cultural, demographic, economic and political differences. The Melrose Center for Global Civic Engagement was established at Ursinus in his name to develop future global leaders and help enact social change.

In some ways, Strainic was one of the first Melrose fellows, considering his mentorship of her and of many others that have been inspired to carry out his life’s work in their own careers.

“It fits in with the whole philosophy of Ursinus,” she says. “We’re taught to think and not to view the world as black and white or through academic principles.”

“Ursinus is about grappling with moral and ethical issues in real-world situations; being able to think on your own and come up with your own arguments and defend them; and also to learn from other people’s experiences and cultures. Those are the kind of people best equipped to deal with the problems that diplomacy presents.”

Editor’s note: Strainic spoke to Ursinus Magazine in a personal capacity and not as a representative of the State Department. Any opinions expressed are her own. 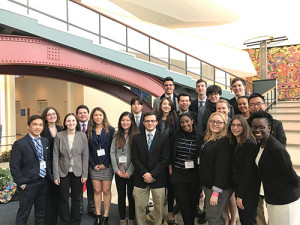 More than 5,000 future world diplomats gathered in New York City in March for the National Model United Nations conference, where they discussed current global issues in a real-world context. The Ursinus contingent, representing Morocco, earned four awards during the summit, including best position paper and honorable mention for best delegation.

“Being in Model U.N. is a humbling experience because you have a chance to work through some of the real-world issues that our international community is dealing with every day,” said Mary Atta- Dakwa ’18, Ursinus’s head delegate. “It improves your interpersonal skills and that can take you pretty far in the international community.”

National Model U.N. provides students with a forum to hone skills in diplomacy, negotiation, critical thinking, compromise, public speaking, writing and research. The students had a chance to meet with their real-life Moroccan counterparts and had dinner with Carolyn Smith Strainic ’11. Learn more about the Model U.N. program at Ursinus in this brief video by Aubrey Basla ’18.