Renee Butler’s first thought when she awoke from a seven-hour procedure was that she must have just been through another round of endless tests. Perhaps an MRI or a CAT scan. Anything to determine what was causing the intense migraine headaches and severe neck pain that were so bad she could barely get out of bed.

“My entire head was pounding, and it radiated down my body,” says Butler, a rising Ursinus College junior who vividly remembers the experience from more than a decade ago.

But a stroke? And then brain surgery to resect an arteriovenous malformation (AVM) that caused it? Nine-year-old Renee couldn’t fathom it.

“It was pretty stressful,” she recalls of that day in September 2008. “It was stressful after I found out that I had actually gone through all that, but also empowering because I realized that I overcame all of it when I didn’t know what was actually going on. I was able to push through.”

While arteries take oxygen-rich blood from the heart to the brain, veins carry the oxygen-depleted blood back to the lungs and heart. A brain AVM disrupts this vital process. An arteriovenous malformation can develop anywhere in the body, but it occurs most often in the brain or spine. The congenital abnormality is so rare that it affects less than one percent of the population. It could rupture and bleed into the brain and cause significant neurological damage. It can also be fatal. 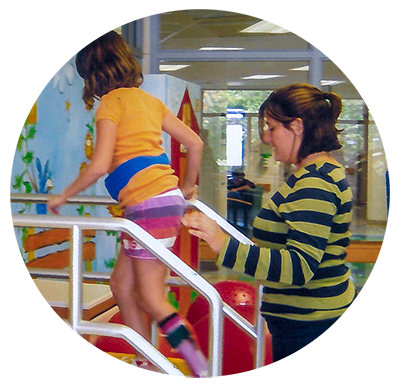 When doctors at Children’s Hospital of Philadelphia discovered what was causing Renee’s intense headaches, they decided to act quickly and operate. She awoke to her family gathered by her bedside, weeks of physical therapy ahead and a new passion: the science of the brain. A passion that would lead her right to Ursinus.

Re-learning how to do simple tasks that usually come naturally can be frustrating, especially for an active, energetic 9-year-old. After her surgery, Renee began an arduous four-and-a-half-week rehabilitation plan that would get her moving again. She worked on fine motor movements in her hands and ankles, even practicing getting on and off a school bus to prepare her for her return to normalcy at home and at school.

Physical therapy would continue for more than a year after she left the hospital, but before that, she was determined to walk out on her own.

“My main supporter was definitely my mom,” Renee says. “She would hold my hand when I was sad at night, but when I was in physical therapy, she gave me my space because she knew that I needed to do it on my own.”

“She looked at me and said, ‘No one else is going to make you walk. Only you.’” And with those words of encouragement guiding her, Renee harnessed her strength and began to walk again.

Weeks after surgery, on October 21, 2008, the next hurdle would be to walk out of Children’s Hospital on her own. No wheelchair. No crutch. She sat nervously on her hospital bed as piles of paperwork for her release were signed. She was excited, but her cane and her walker were no longer by her side to help her walk. This would be the first time she would walk a distance this far alone. 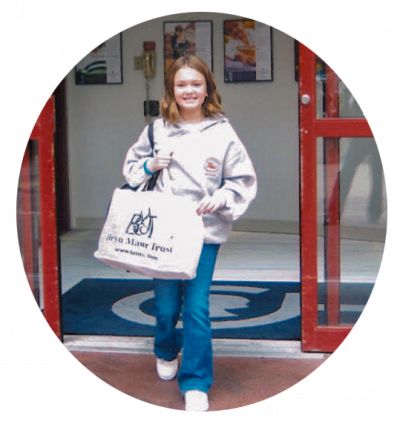 She took one small step. Then another. And before she knew it, she was able to walk out of the hospital by herself.

What was that moment like? Butler gets emotional thinking about the day.

“I felt like there was a light at the end of the tunnel,” she says, tears welling in her eyes. “I was so proud of myself and everything I achieved.”

Butler’s time in the hospital sparked a passion for learning about the brain, but also for helping children who might be experiencing something similar.

“I made a few really good friends during my time at the hospital,” she says. “It was good to talk to them because I think they taught me a lot about perseverance. A lot of them had conditions that were worse than mine. It made me feel like I could keep going.”

It gave her a new perspective and, as she got older, her curiosity and passion for research led her to look into college neuroscience programs. Nearly eight years from the day she walked out of the hospital on her own, Butler toured Ursinus. She was impressed by Pfahler Hall and the steep staircase the leads to its front entrance and was instantly drawn to the research opportunities afforded to undergraduates.

“I knew that this was the place that I needed to be,” she says.

“I think if I didn’t go through my experience I wouldn’t be as passionate about neuroscience as I am,” Butler explains. “It definitely opened my eyes and made me realize that this is very important to me. The brain is such an interesting research area because it’s so complicated. It’s so intricate. After my surgery, I would read about AVM and other conditions, recent developments and technology. It was eye-opening. And I thought, ‘I’m going to be the one to go find more information so that I can help children.’ I don’t want other kids to have to go through it, too.”

Butler is now focusing on a major in neuroscience and minor in psychology. Soon, she hopes to gain research experience under Joel Bish, an associate professor of psychology who specializes in neuroscience. She also works at a behavioral rehabilitation center in Exton, Pa., and looks forward to discussions with the practice’s resident psychiatrists and therapists.

“I want to have a huge impact on research. That’s my goal,” she says. “I want to find ways to help children with pediatric brain trauma and work with them on their recovery. I just know that I want to make a difference.”

When she graduates from Ursinus in two years, Butler will again be taking first steps. The circumstances will be different, but she’ll still be a little nervous—and confident.

“Finally walking out into the world with all the support that I need behind me and being fully prepared is going to feel just as exciting as the day I walked out of the hospital on my own. I’m going to be just as emotional.”

Renee was recently spotlighted in a segment of FOX 29 Philadelphia. Check out the Video! 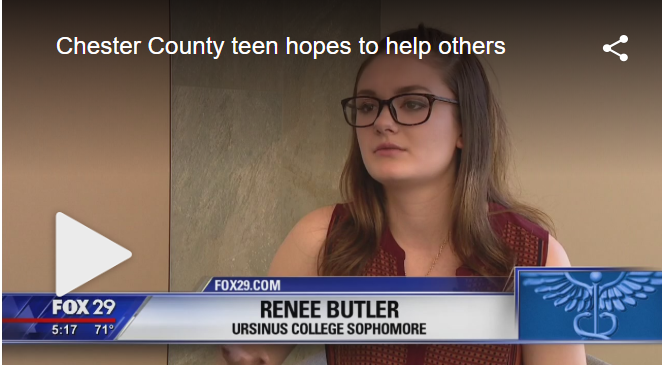