During their participation in the FUTURE Program at Ursinus in the summer of 2017, roommates Justin Martinez ’21 and Joe Pantel ’21 made a fairly important discovery: if you try to fry bacon on the front burner of the kitchen stove in North Hall at six in the morning, you’ll set off the fire alarm and wake everybody up.

But the far more important discovery they made during their time in the program was the value of the connections and relationships they made before even starting their college career at Ursinus. 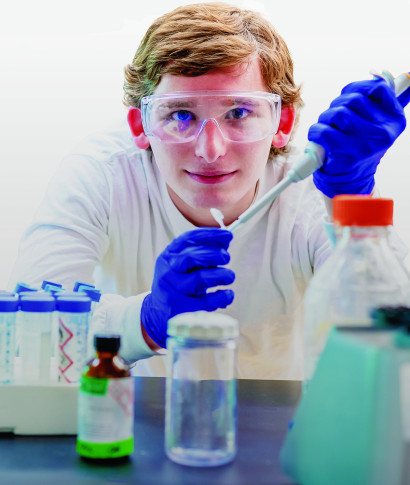 Through programs like FUTURE, Ursinus is clearing the way for students like Joe Pantel '21 to participate in rigorous liberal arts and STEM programming before they begin their first college semesters.“It made me feel very comfortable,” says Pantel, a biochemistry and molecular biology major from Seaside, N.J., “because I did get to know a lot of upperclassmen, so it just wasn’t so daunting trying to make new friends when getting to Ursinus the first day.”

“The connection we all have was the research, of course, but it was the program that brought us together as friends,” says Martinez, a chemistry major from Carteret, N.J.

FUTURE (Fellowships in the Ursinus Transition to the Undergraduate Research Experience) provides early research opportunities to members of underserved populations in STEM fields. The program was based on studies showing that early involvement in undergraduate science research is an effective way to improve retention and outcomes for students from those populations.

Established through a grant from the Howard Hughes Medical Institute in 2012, the program, which is part of the college’s Parlee Center for Science and the Common Good, targets underserved students prior to (or immediately following) their first year at Ursinus. Each student participant completes a four-week summer research experience mentored by an upper-class student and a faculty member.

“The program helps them build this little community so that, even if the coursework gets challenging, they believe that they can do it,” chemistry professor and FUTURE program faculty member Amanda Reig says.

While the rates of undergraduate research in the sciences are high at Ursinus—about 68% for all STEM majors—a full 90% of FUTURE program participants engage in subsequent research.

“I guess one way to think about it is small, but mighty,” Reig says. “We don’t have 40 students that are impacted by this, but I think every person that has participated in the program— the students, the mentors and the faculty—would tell you that it has been a very win-win-win kind of thing. Research is the core of what we do as scientists, so getting students involved in that as early as possible is important to their development as scientists and vital to keeping them or convincing them to continue that path.”

Both Martinez and Pantel have continued down the scientific path since their time in FUTURE. Martinez has been continuing the research he began on spinal cord regeneration in axolotls (Mexican salamanders) in biology professor Ellen Dawley’s lab, and will be working with Dawley again this summer, this time in a dual role.

“This summer he is going to be the upper-class mentor for one of my FUTURE students,” Dawley says. “It’s nice when it comes full circle like that.”

Pantel, who chose to work on the uses of nanotechnology in chemistry professor Mark Ellison’s lab for his FUTURE program experience, is now working with Reig, adding metals to synthetic proteins in order to see what applications they could be used for later.

“I didn’t think I was going to like research,” says Pantel, “but it made me fall in love with it and sent me down the path of wanting to go to grad school.”

“The FUTURE Program gave me more confidence to just keep on going with the science field,” Martinez adds. “When I first walked onto campus it was kind of surreal, because I’ve seen those kinds of labs. It was an amazing once-in-a-lifetime experience.” 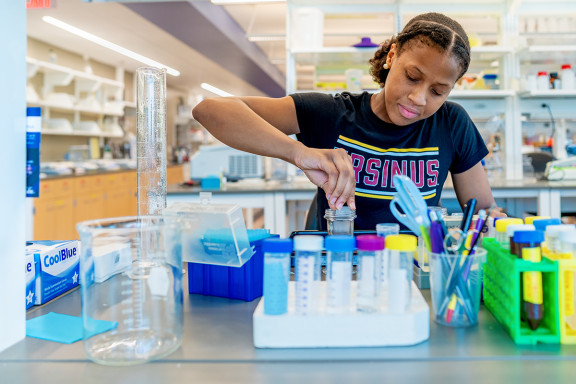 Aliyah Stevens '21 gained a passion for scientific research during the FUTURE program.Martinez and Pantel are just two of the success stories to come out of the FUTURE program. Another student in their summer cohort was Aliyah Stephens ’21, a first-generation biology major from Mullica Hill, N.J.

“Justin’s one of my closest friends now,” Stephens says. “It’s nice I met a study buddy in the summer who I can lean on and go to whenever I need help.”

That kind of support is priceless, because juggling college-level coursework, extracurricular activities and a healthy social life can be overwhelming at times. But Martinez, Pantel and Stephens all agree that their experience in the FUTURE program gave them the confidence and grit to tackle challenges and keep going when things weren’t working out the way they planned. After all, what all the sciences share in common is that their experiments fail much of the time, so scientists have to learn how to overcome failure if they’re to succeed.

And while Martinez, Pantel and Stephens are still considering options for their next steps after Ursinus, Julia Dorsheimer ’19 has already decided on her post-graduate plans.

A chemistry major and math minor from Honeybrook, Pa., Dorsheimer earned a National Science Foundation fellowship to pursue her Ph.D. in organic chemistry at Columbia University in New York City, a choice she was able to narrow down thanks to her experience with the FUTURE program.

Dorsheimer got her first research experience through the FUTURE program the summer before starting at Ursinus in Reig’s lab. At that time, she focused on biochemistry, which combined two of her interests from high school.

But after an internship at GlaxoSmithKline Pharmaceuticals following her sophomore year, which she enjoyed tremendously, she had a conversation with chemistry professor Ryan Walvoord, who suggested she do organic chemistry research in his lab if she was interested in a career in the pharmaceutical industry.

“I could tell that Dr. Reig just knew that my interest was lying more with organic chemistry than biochemistry,” Dorsheimer says, “so we did a little switch.”

“She figured out that that’s really where her passion is,” Reig says. “To me, that is something that’s important—she learned what it meant to do research, and then once she found something she was really excited about, she was able to use that foundational experience to become successful in that area.”

Another FUTURE program student who solidified her passion while at Ursinus is Serena Schaefer, who graduated in 2018 with a double major in math and computer science and a minor in creative writing. She is now working as a software engineer at Microsoft in Bellevue, Wash., after having an internship there during her senior year.

“I think being able to solve problems on my own in the FUTURE program has definitely prepared me for actual software development work,” Schaefer says. “The FUTURE program isn’t isolated; the idea is to continue doing research and continue the connections you formed with the other students and professors beyond those four weeks during that one summer.”

Schaefer, who helped lead a robotics team in her first year of high school, hopes to use the skills and experiences she’s gained through the FUTURE program, and Ursinus in general, to help others from underserved populations.

“I hope to be a mentor for a team of underprivileged kids,” Schaefer says, “because I know that I was given a chance, and not everyone gets that chance. Not everyone knows about the opportunities. I’m very passionate about STEM education so I hope to do more in that area.”

Biology professor Simara Price shares Schaefer’s passion for both STEM and helping underrepresented student populations. She is now coordinator of the FUTURE program.

“I am interested in this work because I have navigated my career as an underrepresented student,” Price says. “I know how important it is for students to see other students that look like them, that have experiences like them, and to see them in the lab doing research.”

Price, who has a doctoral degree in biology from Drexel University, didn’t participate in undergraduate research until the spring semester of her senior year, but it changed her whole life trajectory.

“This one professor from Argentina was the first faculty of color that I had,” Price says. “I felt comfortable approaching her, so I know how pivotal, literally, it can be. Working in her lab I realized that I hadn’t even scratched the surface of what biology had to offer.”

In addition to the FUTURE Program, Ursinus has also had the W.R. Crigler program for over thirty years, and just added the new Teagle Foundation-funded Freedom, Citizenship and Equality program for students who are members of historically underrepresented groups.

“The value that I see in these programs,” Price says, “is providing underrepresented students with the opportunity to feel included from an early stage in their career. Research has already shown that getting students engaged who don’t have the academic capital or cultural capital coming into college is important for retention.”

Participants in the FUTURE program have shown higher persistence as STEM majors (92%) and increased four-year graduation rates in STEM disciplines (85%) compared to their peer group (65% and 61%, respectively).

Terrence Williams, director of Ursinus’s Institute for Inclusion and Equity, says that retention is the result of the strength of the relationships that anchor people to the institution—just as Martinez, Pantel, Stephens and the others have experienced for themselves.

“Our job is to make sure our students are connected with the people who are going to be their lifelong friends and mentors,” Williams says. “We very quickly get folks ingrained in the kind of liberal arts education we’re great at, with a singular focus on nurturing the student community emotionally, socially and academically.”

Williams is also the coordinator of the Crigler program, named for Ursinus’s first African American graduate in 1956, which offers a four-credit course during the summer before the students’ first semester at Ursinus.