Imagine this: Your newborn is suffering seizures and in between episodes is exceptionally drowsy—almost comatose. Tests reveal his blood glucose levels are extremely low. If the seizures continue and the glucose levels remain untreated, the baby could suffer permanent neurological deficits, cerebral palsy and potentially death.

Your baby’s symptoms are diagnosed as Congenital Hyperinsulinism (CHI). If it is the focal type of CHI, there may be a lesion of beta cells on the infant’s pancreas. If the lesion is surgically removed, there is a 99 percent survival rate with your baby growing up normally with no neurological damage. But the tumor is less than 15 millimeters in size and can be hard to detect with an MRI. Additionally, because the tumor is so rare—presenting in only one out of every 50,000 infants—doctors can mistakenly attribute symptoms of the lesion to other causes.

An Ursinus alumna is on the cusp of helping change all this. 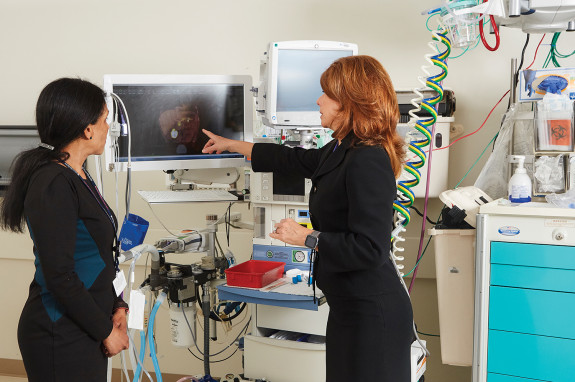 PET (Positron-emission-tomography) scanners are used with injected radioactive agents, or drugs, into a body, allowing doctors to see problems at a cellular level. This means it can target diseases more closely and earlier than other types of scans. Clarke is in the middle of filing a new drug application (NDA) for the radioactive drug 18F-DOPA, which, once injected, will be able to help detect the lesion instantly. She should know by the end of 2019 whether the FDA approves the drug.

“We have to demonstrate the drug is safe and efficacious and I think we have the data to do both,” Clarke says.

One of Bonnie’s great strengths is being at the nexus of myriad initiatives and being able to identify impactful opportunities and actually act on them,” says Dr. John Sunderland, a physicist at the University of Iowa, who works with Clarke. “There is no better example than the 18F-DOPA story. Bonnie recognized a significant opportunity to really help these infants (and their families). She galvanized a group of professionals including the head of the National Cancer Institute’s Cancer Imaging Program, physician researchers from the U.S. and Canada, scientists and regulatory experts, and orchestrated the submission of the NDA. Please understand, drug companies typically submit NDAs with resources 100 to 1,000 times what Bonnie had to work with.”

The biggest hurdle in the application process is getting FDA approval for the facilities that make this drug. Because the agent has a half-life of 110 minutes, the facilities need to be close enough to hospitals so the drug can be delivered in a timely manner.

In addition to working on investigational drugs, Clarke also helps to organize and facilitate education seminars all over the country. The seminars spread awareness of the symptoms of CHI and other diseases, mostly cancers, as well as promote the possible detection and treatment agents that are available— or will eventually become available—in Clarke’s field.

Clarke grew up in Harmony Township, N.J., a rural area in the northwest section of the state. Neither of her parents attended college. As a senior in high school, she knew she wanted to study medicine, but her parents didn’t feel they had the background to guide her school search, so they sought the advice of the town doctor. He encouraged Clarke to apply to Ursinus.

Graduating with a biology degree, Clarke didn’t go on to medical school, but landed a job at Johnson & Johnson in their clinical research and trials division. She worked closely with physicians and researchers in drug trials on everything from oral contraceptives to antibiotics and anti-epileptics. Clarke loved the research.

“I spent half my time at a doctor’s office pouring through medical charts and distilling information,” she says.

After 15 years at J&J, Clarke, who lives right outside of Washington, D.C., took time off to be a stay-at-home mom to her three kids. Then after a chance conversation at her daughter’s baseball game in 2009, she was recruited to join SNMMI as the director of CTN.

The science of nuclear medicine and molecular imaging is highly specialized. There are elements of chemistry, physics, physiology, engineering, biochemistry, medicine and business. Clarke attributes a lot of her base knowledge to her Ursinus education.

“Working on this new drug application (NDA), there is a huge chemistry portion I have to write,” she says. “I have thought many times about Dr. Ron Hess, who was my organic chemistry professor at Ursinus, and how much that class has helped me through the years. My science background from Ursinus has proven invaluable.”

The field of nuclear medicine and molecular imaging is rapidly expanding. The precision drugs being developed treat cancer by targeting only the diseased cells. 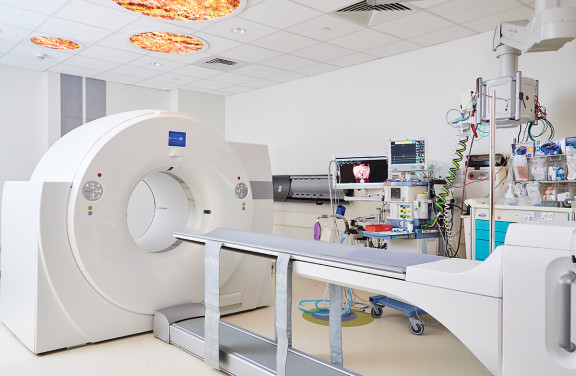 “Chemotherapy aims at any fast-growing cell, which is why your hair falls out and your platelets and white blood cell count drops,” explains Clarke. “It is killing anything that reproduces quickly.”

In molecular imaging, doctors inject patients with a radioactive drug that finds the cancer cells, and then once discovered, injects the same drug with a different radioactive agent attached that would attack only those cells. This targeted treatment means a cancer can be treated without causing the patient to suffer other adverse effects. Targeted radiotherapies are joining standard chemotherapies and immunotherapies in the fight against cancer.

Clarke continues to work on many of these new drug studies every day. She is also working on standardizing PET scanners for trials and continuing to organize education symposiums for physicians. And while she does so, she is thankful that even though she chose Ursinus to become a doctor, her journey led her on an even more enriching path in the medical world.

“Ursinus is a pipeline for so many different fields, and students are prepared to join any one of them,”

Clarke says. “The future of medicine is already here.”