Tom Dixon ’07 speaks and writes in Korean, finished Temple grad school with a 3.7 GPA in educational psychology and is a member of Mensa. But he doesn’t know what he had for lunch yesterday.

Dec. 16, 2015 - 10 a.m. In the courtyard of an apartment building near 10th and Montgomery in Philadelphia with photographer Jeff Fusco, waiting for Tom, who has developed ME.mory, an app which stands in for his daily memory. 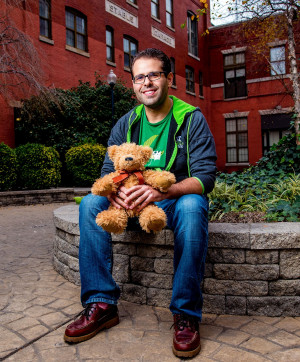 Dixon, a 2007 Ursinus graduate, was out for a run Nov. 22, 2010, in the Fishtown section of Philadelphia when he was hit by a car. He says he does not recall being thrown in the air or his lengthy stay in the ICU with a punctured lung and other injuries. He has recovered, except for a diffuse axonal injury, a traumatic brain injury similar to the injury military personnel sustain when they are exposed to improvised explosive devices. Dixon’s own book proposal titles the first chapter, “The day I will never remember yet the date I will never forget.”

10:20 a.m. Tom appears holding a bowl with a waffle and berry sandwich and carries a stuffed bear, a tribute to Ursinus. Yes, this is the Tom Dixon I remember as a student whose 2006 Summer Fellow presentation was, “The Relationship Between Cognitive Function and Daily Activity in Normal Adults.” 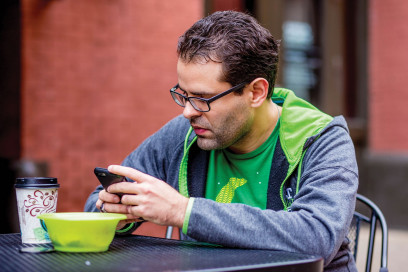 Dixon sustained permanent damage to his episodic memory. He credits the Moss Rehabilitation Center staff with his being capable of living independently. At first, the therapists gave him a notebook and pen to keep track of daily activities, but he soon figured out that a private twitter account could retain and search his memory. “I mean, we all walk around with cell phones,” he said. “There had to be a better way.” Twitter seemed to be right for recording routine moments of everyday life, but the archives are limited. This past summer, he upgraded this process to his own app that he developed and named ME.mory.

10:30 a.m. Sitting on the edge of a fountain, Tom shows us the “Let’s Love Each Other” tattoo on one arm and the same message in Korean on the other. Then he demonstrates a search of the last movie seen (the James Bond movie, Spectre, Dec. 12, 2015); when he ate cannoli (Termini Brothers, April 16, 2015, hmm, not recently enough); and shows us a typical date (Dec. 16, 2014, when he ate spaghetti, ran on the treadmill and listened to Dan Savage’s The Savage Lovecast podcast). He is careful to keep details of his personal relationships within ME.mory but not shared openly.

“First, we must understand what is episodic memory loss and know the difference between that and short-term or procedural memory loss,” Dixon explained, with what must be the same earnest desire to educate that he showed as an ESL teacher in South Korea after he graduated from Ursinus. Procedural memory loss affects processes, like tying a shoe, in which some or all of the many steps in completing a process are forgotten. Meanwhile, semantic memory loss means the person no longer understands what a word means.

Episodic, he has explained many times, has nothing to do with the memory loss in the movie 50 First Dates, or even Memento, a 2000 movie in which the main character suffers a type of amnesia. Episodic memory relates to context, and the episodes one has lived, for example, “when was the last time I ate Italian food, or when did I go to CVS?” Dixon explained. “There is a huge difference between this and short-term memory. I have no problem with working memory,” he said. “I remember Ursinus. I don’t remember what I ate yesterday.” (Hence, many tweets about eating sushi.)

If life is like the episodes of a TV show, he knows the show and the characters, but can’t recall what happened in each episode.

10:45 a.m. It is getting chilly and damp so we suggest warm drinks in a nearby coffee shop. With a Frappuccino, Tom continues to relate his improbable last five years.

Dixon, a psychology major at Ursinus with minors in neuroscience, politics and East Asian studies, returned from teaching in Korea, and was accepted in a pre-medical post-baccalaureate program, to become a psychiatrist. He was a research coordinator at the Children’s Hospital of Philadelphia. After the accident and recovery, he felt it would be irresponsible to enter a field where he would need to prescribe medication.

As a Temple graduate student, he connected with that university’s entrepreneurship program, Temple’s Blackstone Launch Pad and Urban Apps and Maps Studio. They in turn connected him with Jumpbutton Studio.

Dixon uploads an episode when he feels the need, sometimes a few times a day, sometimes many. He can search a five-year artificial memory. He can import tweets and has more than 31,000 entries. All the information is backed up on servers.

“I hope to challenge the concept of ‘having memory loss,’ in particular how ‘we’ – meaning ‘all people’ – automatically accept that we do not know the overwhelming majority of how we have spent our lives, other than in generalities.“

While he realizes the importance of what he has done, he also sees it as just a more intense reliance on artificial memory than most of us need. It’s a digital diary.

“How do we think about this?” asked Dixon, who seems to have a natural patience for teaching. “It is a private artificial memory,” he said. “We all do it all the time. How many times do we search our phone or email?” He has called his daily logging “extreme journaling.”

11 a.m. He stops at the gym. There, he needs a break from the conversation for about five minutes. After the break he tells us about his upcoming New Year’s Eve trip to Mexico. 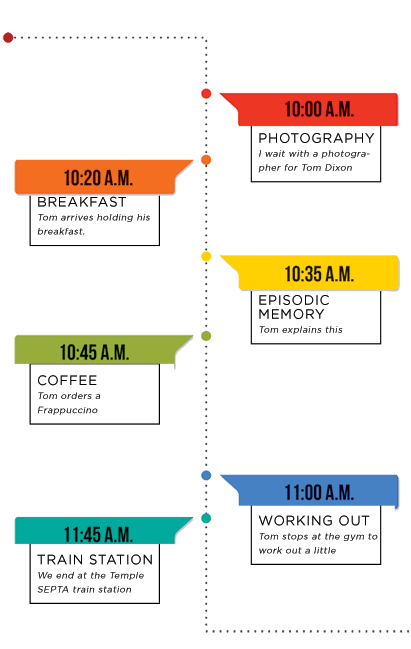 Going to a new location every New Year’s Eve is a tradition he started at Ursinus by traveling to Taiwan, which inspired subsequent trips to London, Amsterdam, Paris, United Arab Emirates and Mexico (from where he returned mid-January). While away, he goes off the grid, and reverts to a notebook for jotting down his memories. He calls it “digital detox.” Resuming these trips after his accident was important in allowing him to feel more in control of his life. He wrote in an article in American Humanist in 2013: “While being cleared to once again travel alone internationally and resuming coursework by entering into my graduate studies in educational psychology at Temple University, which were major milestones in my recovery, I believe that it was only when I was walking through the streets of Amsterdam this past New Year’s Eve, entirely by myself for days at a time, that I felt my recovery was complete. I felt then that all of the therapists, friends, family and others — all of the people who had expressed concern for me and shown care towards me — believed that I could be me, the me I had wanted to be.”

ME.mory answers Dixon’s frustration with Twitter’s limitations. He would download his archive every month into an Excel sheet and found that unwieldy. “We are not walking around with our laptops,” he said. He introduced a newer version this January and is excited about a map with markers at locations where a memory was uploaded. “My memory is as good as I make it,” he said. He can see what time of day he mostly eats Chinese food. Or a pattern in when he goes to the gym.

The app could be helpful to others. “We all have memory issues,” he said. “It’s shockingly common.” He refers here to us all.

Actually, his memory is better than ours in its digital form. “I had the right injury at the right time,” he said. “Twenty years ago I could not have worked around it like this.”

Last November, he held his fifth annual post-accident party called, “Because I Lived.” He received the Temple Young Alumni Diamond Excellence Award, and WHYY’s Newsworks, Technial.ly Philly and other media have told part of Dixon’s story. He has done Nerd Nite talks, which can be found on YouTube, and marketed ME.mory at events such as the Forbes 30 under 30 summit in Philadelphia last fall.

11:45 a.m. We walk to Temple University’s SEPTA station. I am still holding the bear. “Remind me to give you back the bear,” I say. He laughs. “You are asking me to remind you,” he points out. I see the irony. But then I think, “Is he so different than the rest of us?” We search email. We don’t need to remember phone numbers, they are stored in our cell phones. Facebook’s On This Day is a stored memory of sorts. We all use artificial memory to a large degree.

He explained that technology is changing all our memories. A 2013 Scientific American article by Daniel Wenger and Adrian F. Ward contended that the internet was becoming the brain’s external hard drive. “How important is it really to have an organic memory in the future?” Dixon asked.

Dixon had no choice but to leap into the future. He has taken his fate and, with perseverance and spirit, not only has he helped himself, but his experience might help others as well.

Visit Tom Dixon’s website to learn more about the ME.mory app and services.