Ursinus College has long provided an excellent undergraduate liberal arts education, its academic rigor and prestige setting it apart as one of the nation’s Colleges That Change Lives. But at a time when such an education continues to be called into question, Ursinus has decided to not only evolve its curriculum, but double down on it, taking the undergraduate experience on the Collegeville, Pa., campus to the next level while providing a national model for higher education.

“These four questions are central to our new core curriculum, but they have become a catalyst for re-visioning our entire institution,” says Mark Schneider, vice president of academic affairs and dean of the college. “That will change us by bringing us closer to what we always believed in.”

Emphasizing the four questions leads to a more transformative personal experience and capitalizes on a residential liberal education in ways that haven’t been done before at any institution, Schneider says.

At Ursinus, the hope is that, regardless of academic major, every student will be able to think through these themes, apply them to his or her area of study, and return to them when confronted with personal or professional uncertainty.

“We emphasize these four questions rather than any particular texts, tradition or discipline,” says Stephanie Mackler, associate professor of education and assistant dean of the college. “We boldly require common courses while also allowing students to choose electives across the disciplines with the understanding that the entire curriculum shares one underlying aim: to encourage students, in Rainer Maria Rilke’s words, to ‘love the questions themselves.’” 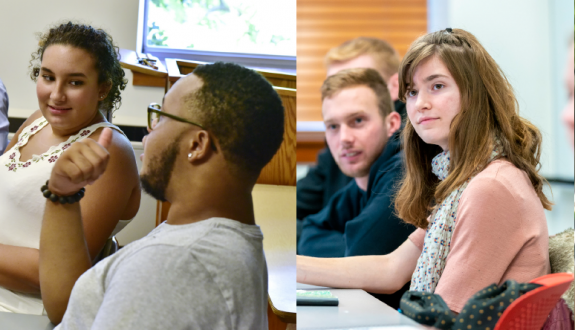 For 20 years, Ursinus students have begun their collegiate journey in CIE, the two-semester course that still resonates with alumni, even years after they’ve graduated. Students engage in common conversations built around a set of works selected to prompt thoughtful reflection. When it came time to update the entire curriculum, faculty who helped revise it decided to take the principles of CIE and apply a questions-based, inquiry-driven experience that could be applied to all four years.

And it goes beyond the classroom.

“By framing our new core with four open questions, the core is not constrained to the curriculum, but encourages students—and faculty— to think about the full residential experience,” Schneider says. “Students are asked to think about experiences as a resident advisor, as a student athlete, while in a research laboratory or during a performance, or simply in the dining hall. In the process, connections between the academic and the co-curricular will be discovered and reinforced.”

The four open questions shift away from an idea that at college, students seek out the answer or the right answer and that these answers have already been found.

“You don’t have to know the answer or settle on an answer,” Mackler says. “Instead, the questions give the students the ability to explore different ways of thinking about it.  In this society, I think we’re attached to answers and solving a problem. We’re uncomfortable with uncertainty and I think that’s why this is a radical curriculum. It’s very counterculture in a subtle way.”

If it’s countercultural, it’s because we live in a society oriented ever more insistently on short-term self-interest, says Paul Stern, a professor of politics who helped revise the curriculum.

“Ursinus aims to be a counterweight to this trend by educating students to think beyond the immediate, beyond narrow self-interest,” he says. “We think that this education is more beneficial not only for their own lives, but for the community they inhabit.”

The open questions core has already gained national media attention, appearing in Inside Higher Ed and the Chronicle of Higher Education, both well-respected publications in the higher education industry. The Inside Higher Ed piece posits, “Basing a curriculum on four enduring questions may seem innovative, and in many ways it is. But it’s also a doubling down on what Ursinus already thinks it— and liberal arts colleges generally— does best.”

“Building our curriculum around questions is a statement about what education fundamentally means here at Ursinus,” says Abby Kluchin, an assistant professor of philosophy and religious studies and pedagogy coordinator for CIE. “It’s the beginning of a process that won’t only last four years, but a lifetime. I also think it reflects what you might call a stance of epistemic humility. None of us can hope to know or even to learn everything, but despite (or maybe precisely because of) that, we’ll keep on reading, talking, thinking and reflecting, both alone and together.”

Stern adds, “We think individuals live a better, a richer life if they base their responses to these questions on serious reflection, reflection each must undertake for him or herself. Doing so, individuals live on the basis of principles that are neither arbitrary nor coerced.”

While a student’s Quest begins in CIE, the questions are being infused into first-year advising groups, study abroad, and Career and Post- Graduate Development, which asks students to use the four questions and their reflections as preparation for applying for internships,  fellowships, graduate programs and jobs. Ursinus has developed a new interdisciplinary core capstone course requirement and the Parlee Center for Science and the Common Good regularly frames its popular speaker series around at least one question.

“The environment of the small liberal arts college—its existence as an intellectual community that comprises the efforts of faculty, students and staff—provides the best circumstances in which to begin those reflections,” Stern says. “But only begin. The questions that structure our inquiry at Ursinus are genuine questions, not simply problems to be solved. If we succeed, these inherently controversial issues will be the object of our students’ lifetime inquiry, as they pursue greater clarity regarding what should matter most to each of them.”